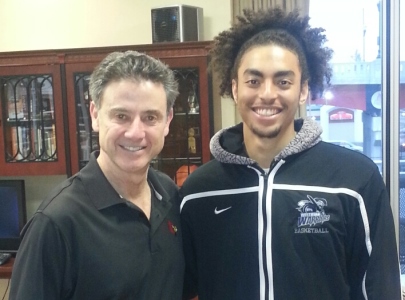 The past month has been a whirlwind in the college recruitment of Westwind Prep Academy 6-foot-3, 180-pound senior combo-guard prospect Lyrik Shreiner.  After numerous recent strong performances at Westwind Prep, Shreiner has recently saw his recruiting stock begin to soar - reeling in college recruiting interest from numerous high-major division-I programs.

With many college programs now looking to recruit Shreiner, the first school to show him serious attention was current national champion, University of Louisville.  Shreiner would take his first official recruiting visit this weekend to Louisville, Kentucky, where he took in all that the elite college program could offer him.  While being hosted by the school's coaching staff and players, Shreiner got a valuable opportunity to witness the preparation and commitment level of the nation's defending champions.

"It was great - I really enjoyed it," said Shreiner after his visit.  "I really got a chance to see everything."

Shreiner would have the opportunity over the weekend to observe the team practice, meet with Louisville Hall of Fame head coach Rick Pitino, watch the team prepare for a game, view the team's shoot-around and team video, tour the campus and facilities, and also get the know the current players on a personal level.  Shreiner took it all in stride and felt like he belonged throughout his entire visit.

"I feel like a part of their team already," said Shreiner.  "It is hard to come home after that experience.  It was really cool."

The Louisville coaching staff expressed to Shreiner that they are recruiting him as a 2015 college prospect - extending him a scholarship offer after spending another post-graduate year first.  Currently a 2014 prospect and still only being 17 years of age, Shreiner could benefit a great deal from another year of preparation before entering the collegiate ranks.  Shreiner would have time to get stronger physically, while having another club season to compete against the nation's top prospects.  As a 2015 college prospect, Shreiner becomes a much more valuable asset to a college program.

After a recent scoring outburst where Shreiner exploded for 65 points – breaking the Arizona high school state scoring record on 26 for 27 shooting, college coaches have been ringing the phone off the hook for the Westwind Prep coaching staff and Lyrik Shreiner.  Shreiner aslo recorded a team-high 24 points in a narrow road loss to top-ranked Findlay Prep (NV).

Shreiner is looking to make a commitment this spring in preparation for a post-graduate season.  He advised me that he would like to make a decision rather sooner than later, and plans to schedule more recruiting visits for himself soon.

This weekend was a rare opportunity for a prospect such as Shreiner who has grown as a player and as a person in a short period of time, through his tremendous dedication to the sport and himself.  Through the strong support of the Westwind coaching staff this season and his wonderful mother, Melody Shreiner, this young man has flourished as a player and as a person.

Lyrik Shreiner is an inspiration to student-athletes everywhere, and is quickly becoming a hero to the state of Arizona.