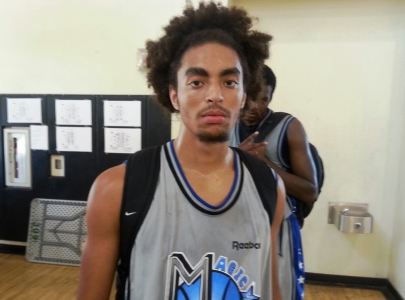 Two of Arizona's elite overall prospects from a dominant 2014 class in the state will be furthering their high school careers, if you will, this season at different top-rated prep schools in the country.  6-foot-3 senior guard Lyrik Shreiner and 6-foot-9 post Andre Adams will be passing on heading to the division-I ranks this season, and attending a year of post-graduate work at different prep schools of their choice.

Shreiner had many offensive and defensive outbursts last season, but none was more impactful than his scoring explosion where he exploded for 65 points – breaking the Arizona high school state scoring record on 26 for 27 shooting from the field in the game.  Shreiner also recorded a team-high 24 points in a narrow road loss to top-ranked Findlay Prep (NV) – a game in which he also held top-rated nationally ranked Kelly Oubre (Kansas signee) to 7 points.  As a result, Shreiner saw his college recruitment soar.

Shreiner had considered Cincinnatti, Washington State, and even a late push from the University of Oregon, but in the end Shreiner chose to attend a year of post-grad at Fishburne Military Academy in Virginia, one of the top post-graduate basketball programs in the country.

Shreiner is coming off an excellent showing this summer, and should become one of the more sought after recruiting targets in the country this year.

The top available prospect from Arizona’s loaded 2014 class was Westview High School’s 6-foot-9 gruadated post prospect Andre Adams.  Considered as the top available unsigned post prospect in the country by many national scouting services and media outlets across the country, Adams took his time in reaching a decision for his future.  While looking over his recruiting options and awaiting a report on his academic progress, Adams made his decision to attend an elite-level prep school in Florida - electing to attend a post-graduate year at IMG Academy in Florida.

IMG Academy is widely known nationally for developing some of the nation’s elite level high school prospects, as the program has very impressive facilities and resources for their athletes.

Adams has developed a great deal and is coming off a very strong spring and summer showing for himself as well, although he hurt his ankle during the summer and mist some key action late in July.

Both prospects have already left the state and are now well positioned at their new locations.  Look for these two young men to raise a lot of recruiting interest this season, as both prospects are now considered 2015 prospects.