Lyrik Shreiner Among Better Talents In 2014 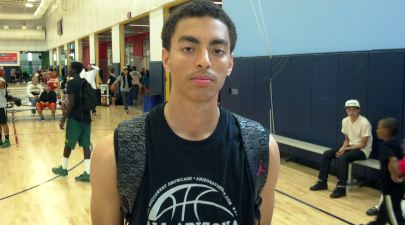 With our summer rankings set to be released next week for the 2014 class before the start to the summer competition, one player that should benefit in the rankings for shooting guard prospects is Glendale High School's 6-foot-3, 170-pound rising junior guard Lyrik Shreiner.

Shreiner emerged on the Arizona basketball recruiting scene last spring and summer after his freshman season at Glendale HS - displaying very good athleticism and a high motor on the basketball floor.

This season as a sophomore for Glendale HS head coach Scott Stafford, Shreiner was a major factor for his Cardinals team - averaging 14.6 points, 4.8 rebounds and 1.6 steals per/game on the season.  Shreiner put up good overall numbers on the season, while leaving basketball enthusiasts in the state hungry for more in the future from this promising prospect, as the team finished with a mere 12-17 overall record on the season.

Shreiner is already beginning to hear from numerous division-I college programs for the future, although it is still very early for him and much of his recruitment, at this point, are contact letters.

This spring, Shreiner showcased his abilities in many local events and also showed well in regional competition at such events as the Pangos Spring Spectacular (NV) and the Double Pump Spring Classic (NV) - both NCAA certified events.

Shreiner's high level of confidence in his play and an ability to create his own shot were glaring and nice attrbitues for this young prospect.  Also glaring was Shreiner's poor shot selection at times.  Since he is very skilled and capable of getting his shot at almost any time in the offense, Shreiner still needs to develop his understanding of a good shot and when to make plays for himself or others.  This player attribute, known by scouts as a feel for the game, will be very important in Shreiner's ability to take his game to another level.  Without this feel, he will be limited in his development as a player and as a college prospect.

Shreiner's sheer athleticism and ability to create and finish plays still has him among the very best players at his position among the 2014 class, and he currently projects as a division-I prospect, although, what level will continue to be determined by his developement fundamentally and as a basketball player.

I will continue to keep a focused eye on this young man's development as a player, since he is a nice talent with excellent promise.  If he can figure it out on the basketball court and is willing to put the time in, he has the potential to play at a mid-major level.

Arizona Hoop Review Scouting Report:  Shreiner is a very athletic talent with excellent promise as a college prospect physically.  He has excellent lift off the floor and a quick jump, which allows him to finish plays often inside the paint and in transition.  He is at his best as a slasher and in the open floor where he thrives.  He possesses an excellent motor, but often times attempts to make plays before the play develops, causing rushed or forced shots.  His shot selection must improve to make him more efficient as a shooting guard prospect.  He is an excellent scorer from mid-range and off the dribble, but still needs better consistency on his perimeter jump shot, while also needing to improve his range as well.  He is a very good ball handler and is capable of playing both guard positions on the floor, although he needs to become a much better passer and learn to make players around him better.  A very good defender with excellent lateral quickness and anticipation on the court.  has the potential to become a nice prospect with a better understanding and feel for the game.