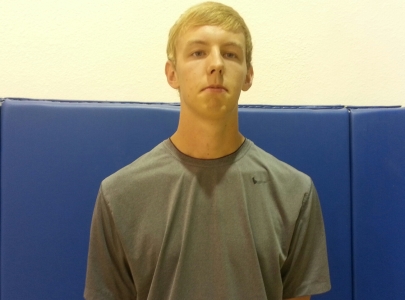 When head coach Eli Lopez took over at Mountain Ridge High School almost three years ago, the talent pool at the program was very limited in scope.  Since taking the helm, Lopez and his staff have worked hard to develop their players - creating a basketball culture within the program that has improved a great deal and now promotes winning and competing at a high level.  As a result of the advanced teaching by Lopez and his staff, players at the program have developed quickly.

No player in the program has developed more than rapidly developing 6-foot-9 senior post Luke Smith.  After two years of teaching from Lopez, Smith is now beginning to come into his own, and, as a result, is beginning to garner recruiting attention from several division-I programs.

I recently had the opportunity to watch Smith play in the Area Codes Super 80 Showcase event held by Chad Groth, and came away very impressed with Smith's development as a prospect.  In the event, Smith showed a very improved ability to score inside and around the paint, while also showing that he can also step outside and shoot the basketball as well.  Smith's footwork has improved and he has solid low-post moves that allow him to finish plays in the post.

Smith still needs to add some serious weight to his thin frame to reach his full potential.  He has a body that can take on much needed size, and he will need to compete at the division-I level in the future.  He does run the floor very well for his size and so with added physical strength, I look for Smith's production to take off.

Since I first saw Smith, he has been contacted by several division-I schools, including the University of Portland and Air Force.  I look for him to garner much more recruiting attention this spring, as programs continue to their pursuit for low-post size in the 2014 class.

Depending on who drops off the recruiting board this fall in the 2014 class, Smith should become one of the more sought after recruiting targets late.

"He has really worked hard over the past two years," said Mountain Ridge HS assistant coach and Arizona coaching legend David Lopez.  "Now it is starting to pay off for him."