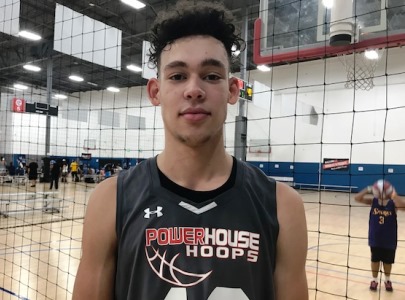 Elliott has gotten off to an excellent start this July also, as he performed very well in the recent Southwest All-American Camp, where was selected as an all-star performer in the event.  He then followed up that performance with a strong performance this weekend in the West Coast Elite Summer Kick-Off.  While playing for his Powerhouse Hoops Schumaker team, Elliott played very well this weekend and showed a nice ability to make plays in the post and finish strong over and around defenders.  Elliott runs the floor hard and is a very active rebounder and shotblocker.  His activity is infectious and raises the overall level of play of his team.

Elliott previously received division-I offers for himself from Portland State and Northern Arizona, although it is currently unclear as to how serious both programs currently are about Elliott.  His recent performances have proven that he is definitely worthy of that level of college recruitment, and maybe even higher.  Elliott has reeled in loads of division-I interest though, and he should garner much more recruiting attention this July.

He has received strong interest from such schools as Stanford, Grand Canyon, New Mexico State, Montana and Air Force, just to name a few.

As more college programs catch a glimpse of Elliott this summer, look for him to generate much more recruiting interest for himself, and also reel in many more offers as well.  A prospect with his size, activity and potential is just too good to pass up.

I will continue to follow his recruitment closely and bring you any updates as they continue to develop.