Logan Schayes Making His Own Way Despite Legendary Family 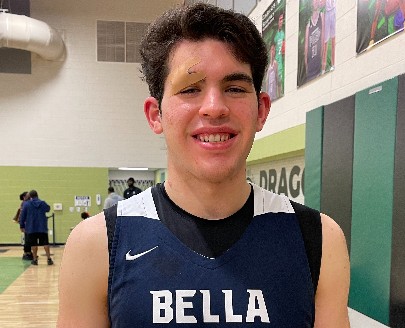 There are many youth around the country that have the difficult task of following up in the footsteps of successful parents, and Bella Vista Prep skilled 6-foot-7 senior forward Logan Schayes is no different. In fact, the Schayes basketball lineage is amazing and a tough act to follow, but Schayes is making his own way while now playing as an unsigned senior in Scottsdale, Arizona, and during the COVID pandemic.

It has been a very challenging year in many respects for Schayes, who moved back to the state of Arizona after a short stint in Colorado. Schayes began his high school career at Pinnacle High School in Arizona, before leaving the state and returning. Since arriving at Bella Vista Prep for his senior season, Schayes has had "four different coaches," and has shared time between the program's National Team and Canyon Athletic Association (CAA) Open Division team. Schayes has still flourished this season, while also managing to avoid contracting the COVID pandemic.

While dealing with all of that, Schayes has competed throughout his life and currently, while looking to live up to his family name and basketball tradition. Logan's father Danny Schayes, is a retired professional basketball player who played for Syracuse University and played (18) amazing seasons in the NBA, from 1981 until 1999. Danny Schayes stands 6-foot-11 and played for many NBA teams, including the Phoenix Suns.

Logan's grandfather Adolph Schayes is an absolute legend of the sport. "Dolph" Schayes was a professional basketball player and coach in the NBA. A top scorer and rebounder, he was a 12-time NBA All-Star and a 12-time All-NBA selection. Schayes won an NBA championship with the Syracuse Nationals in 1955.

Dolph Schayes is generally credited with being the first modern basketball forward. His career began in 1948, before the formation of the National Basketball Association (NBA) in 1949. His playing career totaled (16) years with the Syracuse Nationals, which became the Philadelphia 76ers in 1964. He played for the Nationals from 1948 to 1964, and during that time, he was an All-Star twelve years in a row, became the NBA's all-time best scorer, and by the time he retired from playing, had played more games than any other player in the NBA (1,059). He was also the NBA's all-time leader in scoring, with 19,249 points to his credit, and the leader in free throws made (6,979) and attempted (8,273). There are too many honors and stats to list for the legendary Dolph Schayes.

For Logan Schayes, the game of basketball was not his first love. Instead, Logan excelled in the sport of baseball, and ranked among the best baseball players in his class. As a hard-throwing pitcher, Schayes was on pace to earn himself a high-major Division-I baseball scholarship, and, lost likely, a pro contract, but he instead changed his mind - leaving the sport he loved, for a sport he loved more, basketball.

In the sport of basketball, Schayes has chosen to be Logan Schayes, and not his family predecessors. He is a tough and rugged rebounder and finisher inside the paint. He enjoys physical contact and plays hard on both ends of the floor. He does not need the basketball or plays ran for him to contribute. Instead, he makes it happen for himself and his team by competing hard and being a vocal leader on the court. He runs the floor every chance he gets, sets good screens and rolls to the basket hard. Logan also is a good defender, something the Bella Vista National Team has needed this season. For the CAA Open Division Team he has averaged a double-double this season, with 20+ points and 10+ rebounds per/outing.

Schayes is looking to land himself a college scholarship this spring, while he understands that it has been difficult to get recruited during a time when the pandemic has not allowed for college coaches to be on the road and recruit. Schayes is currently hearing from numerous smaller college programs for his services, and he is hopeful that his play this season and film compiled from the many games he has played between the Grind Session and the CAA will benefit him.

Schayes is currently one of the top unsigned 2021 prospects in the state, and bigger post players with toughness and a nice overall offensive skill-set often get their just due over time in the recruiting process. Schayes is also an excellent student that has worked very hard in the classroom, which also benefits his overall package for a college program - a no nonsense student-athlete that knows exactly what it takes to be successful at any level. Many prospects around the country are taught this culture, while this version of the legendary Schayes family has absolutely lived it - growing up in the footsteps of two former greats.

I have full confidence that Logan Schayes will be just as great over time, in whatever he decides to do for his future, as he has the intangibles that it takes to be great - hard work, a great attitude and a personality that is contagious.

Logan Schayes grew up as a tremendous reporter and game analyst as a youth, interviewing some of the best basketball talent in the world as a kid. During the process, Logan developed a great feel and understanding of media, as evidence now in our recent interview with Arizona Preps.