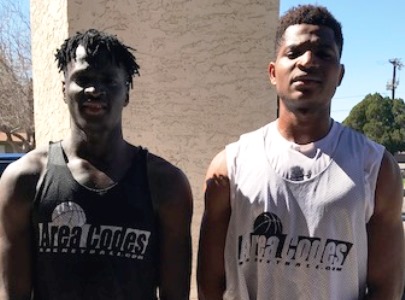 Arizona's 2020 and 2021 Classes are absolutely loaded with talented prospects.  Three of the elite prospects in these two classes will be representing Paradise Honors High School this high school season, after moving to the program last season.  6-foot-6 ultra-athletic junior wing Jerry Lliya, 6-foot-7 junior forward Roy Eze and 6-foot-10 sophomore post Matur Dhal have had to overcome some adversity over the past year, but now are getting settled just nicely at Paradise Honors HS, and make the program the overwhelming favorite to win this year's 3A State Championship.

After beginning last season at CGM Prep Academy for basketball, and attending classes at Phoenix Christian Prep Academy, these three prospects would be forced to leave the CGM Prep program after it was closed down.  Each student-athlete would go through many changes in their personal lives to maintain some level of consistency academically, while also having to make sure their living arrangements were adequate for them to thrive as student-athletes.  A lot to go through for young men on their own, and much more than other young men are going through these days.

After their former basketball program was leveled, Lliya and his two program teammates would each look to land at another school to continue their education.  With some help and care, Lliya, Eze and Dahl would each land at Paradise Honors High School, where they will pick up their playing careers this high school season.  Lliya, Eze and Dahl would help any high school program as additions to the lineup, and they will definitely help Paradise Honors become a dominant favorite to win this year's 3A State Championship.  More importantly, they will now have a chance to be successful as student-athletes and have a chance for a good future.

Lliya is a tremendous talent - a big-time young prospect with loads of athleticism.  A native of Nigeria, Lliya has unique athleticism and a terrific overall motor, which are serious attributes for a college prospect.  He is an ultra-athletic wing prospect with an ability to play well above the rim in a halfcourt set or in the fullcourt, while slashing to the basket.  He attempts to dunk everything, every chance he gets and is a human highlight reel in the open floor.  Lliya's best attribute is his excellent motor.  He has a motor that doesn't stop and continues to run at a high rate for long periods of time on the floor, and never seems to slow down, which allows him to make plays consistently on the court.  He has the potential to become a very good defender, as a result of such energy and work ethic, and with continued focus, he could become a lock-down defender over time.  A definite high level two-way player.

Eze is an athletic post player that runs the floor well, and is a very good finisher in the open court.  He is a good low-post scorer and has a solid mid-range jump shot, which opens up his ability to score inside the paint.  Eze is a good finisher around the basket.  He has solid low-post footwork and solid low post moves.  He is an active rebounder and shotblocker that competes on both ends of the floor, and is also a good passer out of the post.  He has a bright future ahead of him.

Matur Dahl is a very long and skilled post player that has good overall versatility.  He runs the floor very well and is a good finisher in the open court.  Dahl is a good ball handler and passer for his size and youth.  He is an active rebounder and shotblocker.  He has a good jump hook and good low-post footwork.  He also has good overall versatility as a player.  Dahl still needs to add some serious size and strength to his body to maximize his potential over time, but he is a very good looking young prospect with a lot of upside.  A big-time talent over time.

These three prospects will make the AIA very exciting to watch this season in the 3A Division, and I look forward to covering this program all season long.  Beyond basketball though, these three young men now have a renewed opportunity for their futures and a chance to be very successful over time.