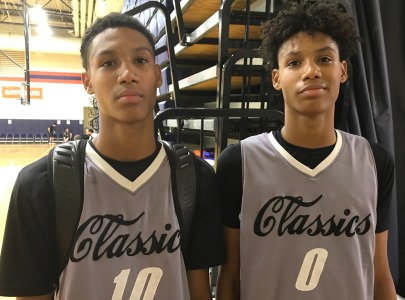 Deer Valley High School's talented and skilled 6-foot-6 sophomores, twin brothers, Jaret and Jalen Allen, are two of the state's top prospects for the 2019 class.  Just like their father, Jerry Allen, who was a gifted performer for Grand Canyon University in the late 1990's, these two young men have an excellent future ahead of them.

The Allen brothers are glaring young talents that are quickly beginning to come into their own as college basketball prospects.  Both prospects are long, rangy and very skilled performers that grew up playing the game of basketball a great deal.  With their father being a former professional player himself, the game of basketball has come easy to these two young talents.  As good as they both have become, their best years are well ahead of them.

"They both love the game and like to have fun," said Jerry Allen about his two twin sons.

Jaret and Jalen both are playing this club season for The Classics 16U squad, which is absolutely loaded with top-rated talent from Arizona's 2019 class.  The team has been tough to beat all spring and is coming off a 16U tournament championship at Ryan Silver's West Coast Elite Spring Classic event in Las Vegas during the NCAA Evaluation Period.

Jaret Allen is the better college prospect of the two brothers.  Jaret is a very skilled and athletic wing prospect that is capable of playing several positions on the floor.  He is an excellent shooter of the basketball with a superb release which looks effortless, and, as a result, has unlimited range on his shot with accuracy.  He also has a very good mid-range game, which makes it very difficult for him to be guarded on the perimeter.  His athleticism also allows him to play above the rim and finish strong at the basket over defenders.  Jaret is also a very good ball handler and passer - a fundamentally sound prospect.  He is a very good defender with excellent length and anticipation in the passing lanes.  The sky is the limit for this young talent who has serious upside physically.

Jalen Allen is also a very good looking college prospect.  While he is not as advanced at this point as his brother, he too is a nice looking college prospect.  Also a very skilled and athletic wing prospect that is capable of playing several positions on the floor, Jalen is more of a 2/3.  He is a good shooter of the basketball, but is much more of a mid-range shooter with a nice mid-range game that allows him to score effectively inside the three-point line.  As he adds more consistency to his shot from deeper ranges, he will see his game really progress.  He is much more of a slasher with and without the basketball, and is a good finisher around the basket.  He is also a good ball handler and passer, and a very good defender with excellent length and anticipation in the passing lanes.  As Jalen gets stronger physically, watch out.

Both prospects are serious recruiting targets for college coaches to take a hard look at for the future, and these two young men will have Deer Valley High School in the serious hunt for a state championship next season.

I will be keeping a close eye on both of these two prospects, as they continue to develop rapidly over the next two high school seasons.  With the tremendous upside that they both possess, these two young men are worthy of serious recruiting attention.