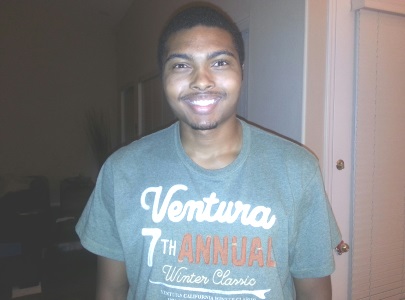 Not too long ago, former legendary three-sport star athlete Carlos Artis broke numerous Arizona state records in basketball, football and track and field while attending Washington High School in northwest Phoenix.  Artis made a big name for himself within the state - ranking as the state's top basketball prospect, the nation's top wide receiver and also the state's top track & field athlete.  Artis would go one to sign a football scholarship with Arizona State University, while also playing basketball for the Sun Devil program.

Artis was most notably known during his college career for catching former NFL quarterback Jake Plummer's first college touchdown pass during a home game at ASU.  While Artis would later transfer schools and have a career-ending injury while playing for the NFL's Philadelphia Eagles, his stake would be firmly planted in the record books within Arizona high school sports.

Now today, more than 20 years later, his son is looking to make a name for himself in a newer community located in Gilbert, Arizona.  While attending Campo Verde HS, 6-foot-5, 215-pound senior forward Legend Artis is looking to make his own name, while playing for a high school program that has only been in existence for 5 years.

Unlike his father whom was ultra-athletic and dominated the state of Arizona with his superior length, athletic prowess and sheer confidence and a personality unlike any other, the younger Artis is a quiet and reserved athletic talent that plays the game much differently - utilizing a very fundamental approach to the game that is highlighted by his physical strength and high basketball IQ.  Like his father, Legend Artis is looking to break records at Campo Verde HS this season, as he will look to become to school's all-time leading scorer this season in the school's young history.

Artis averaged 8 points and 5 rebounds per/game last season as a junior on a team that finished with a 10-12 overall record on the season.  I look for Artis to have a big senior season for himself, and produce much bigger numbers this season in his final go-around.

A true power forward prospect, Artis is an undersized stretch four-man that enjoys playing with his back to the basket and also is capable of stepping out to the perimeter and making shots from 15-18 feet.  He has good low-post footwork and a nice jump-hook.  He is a strong offensive rebounder that gets good inside position and does not mind physical contact.  He has a long wingspan and plays much bigger than his size suggests.

Artis runs the floor very well and is a good finisher in transition.  He runs for days and has excellent energy on the floor.  He is also a good low post defender and is capable of stepping outside and defending smaller players as well on the wing.

I have not met a nicer kid than Artis in my 18 years of scouting Arizona basketball.  This young man is an excellent student and an even better person.  You won't find Artis at a party.  Instead, you can find him at home working on homework, in the gym working on his game or at an event at his church, Pilgrim Rest.

Artis advised me that he currently has received interest from such college programs as Columbia, PENN and Dartmouth, and will look to gain much more recruiting interest this high school season, as he looks to turn in his best season of his high school career.

While it is almost impossible for another prospect these days to replicate the performance of former superstar Carlos Artis, as more kids are playing the game of basketball today in the state of Arizona than ever before; Legend Artis is dancing to the beat of his own drum and looking to make music of his own.  Oh yeah, he also plays five different instruments as well.

I will be keeping a close eye on this young man this high school season, as he looks to continue making a name for himself amongst the state's top basketball prospects.

Notes:  A younger brother of Legend Artis, Kingdom Artis, is the next top-rated prospect in the family.  A 7th grader, Kingdom Artis is a big-time young prospect with excellent potential for the future.  A member of the state's 2018 class.