Lightfoots Leads A Nice List of 2016 Signees This Week 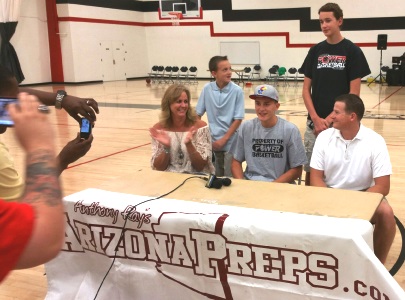 The fall NCAA signing period, which is also referred to as the "early" signing period, began this week.  The period which began on Wednesday, November 11th, will run for a full week, until November 18th.  There are numerous Arizona prospects, members of the 2016 class, that will be expected to sign national letters of intent with the college programs of their choice this week.

This impressive list of college basketball signees is led by the recent commitment and signing of Gilbert Christian High School's 6-foot-9 senior post Mitch Lightfoot.  Lightfoot shocked the state when he gave a fall pledge to the University of Kansas and head coach Bill Self and his staff.  Lightfoot's signing with the national basketball power raises this year's 2016 class to another level - providing the star power for the class.

Sunrise Mountain High School's talented 6-foot-6 senior wing Elijah Thomas became one of the elite prospects in Arizona's 2016 class with a terrific performance this spring and summer.  As a result, Thomas received loads of college recruitment.  Thomas signed this week with Saint Mary's College and head coach Randy Bennett, an Arizona native.  Thomas had coaches all summer intrigued by his raw talent and versatility.  This summer was a true coming-out-party for Thomas, as many college coaches and media marveled at his abilities to handle the basketball and make the right plays for his team.  His college-ready body also intrigued coaches.

This year's class of 2016 prospects are loaded with talent and it shows, as many of them are off the recruiting board early.  Many more prospects in the class will look to garner recruiting attention throughout the high school season - in preparation for the spring or "late" signing period.