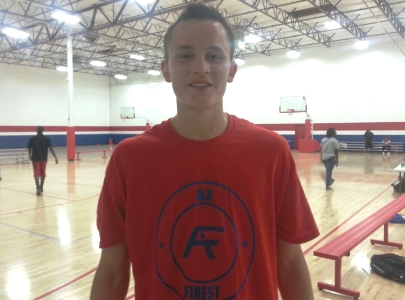 Gilbert Christian High School's talented 6-foot-9 senior post Mitch Lightfoot has been the state's top recruited prospect in the 2016 class.  Lightfoot is coming off a very good spring and summer performance, where he earned significant high-major division-I interest from around the country.  This week, Lightfoot chose to narrow down his list of schools, and focus directly on 5 schools.

This week, with many schools looking to land the top-rated post prospect, Lighfoott chose to trim his list of college programs to Arizona, Kansas, Utah, Stanford and St. John's.  Each of these five schools are top-rated national college programs, with Arizona and Kansas leading way at the elite-high major level.

It looks as though Lightfoot will take official recruiting visits to each school, or atleast to a couple before making his decision.  Lightfoot will look to sign with one of these college programs this fall.

Lightfoot is also coming off a nice season where led his high school program to a Division-II state championship.  It was a challenging year for him though, as he had to sit out the beginning to the 2014-2015 high school basketball season due to transfer rules.

Arizona Hoop Review Scouting Report:  Lightfoot is a very nice talent with broad shoulders and a nice physical frame that should add weight very nicely over time.  In fact, Lightfoot will easily be able to add 20-30 pounds of muscle to his now thin frame over time – a fact that will take his game to a completely different level over the next 3 to 4 years.  He already possesses a strong feel for the game and a nice overall skillset, which allows him to make plays inside the post or from the perimeter, where he has developed a great deal over the past year.  He is very athletic for a player his size and has excellent explosion off the ground - allowing him to finish very strong at the rim.  He dunks the basketball very well and plays well above the rim.  Lightfoot also has a mean streak in him, which allows him to raise his game to the level of his competition - a very nice attribute.   Lightfoot has really developed his pereimeter touch, but more consistency from the perimeter will open up his entire game.  An active rebounder on both ends of the floor.  More physical strength will take his game to the next level in his ability to rebound against bigger post players.  An excellent shotblocker with good timing and length.  A nice overall prospect with upside.