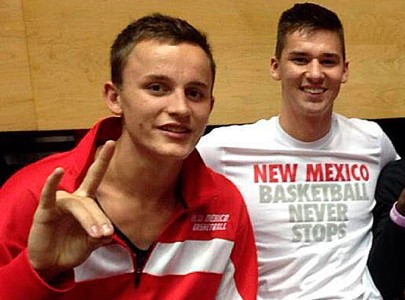 Gilbert Christian High School's talented 6-foot-9 junior post Mitch Lightfoot is coming off a nice season where led his high school program to a Division-II state championship.  It was a challenging year for him though, as he had to sit out the beginning to the 2014-2015 high school basketball season due to transfer rules.

Lightfoot did have something to hang his hat on though, as he had already verbally committed to the University of New Mexico last summer.  With a commitment already in place for him, Lightfoot continued to work hard and play through this spring evaluation period - looking to mature physically and improve as a player.

On Friday, it was announced that Lightfoot has decided to de-commit from the University of New Mexico and re-open his college recruitment.  As a result, Lightfoot will now have an opportunity to take full advantage of his development as a player and reap the rewards of the recruiting process.  When Lightfoot committed so early last summer, he did not have much of an opportunity to see what was available to him.  Now that will significantly change for the better.

Interestingly enough, Lightfoot's decision to re-open his college recruitment comes right after the recent hiring of Bob Hurley by Arizona State.  Hurley looks to be headed for a very successful tenure for the Sun Devils and will not be bashful in his attempt to lure the state's elite talent to the program.  Lightfoot is currently the top-rated prospect in Arizona's 2016 class, and will immediately become a very serious recruiting target for Hurley and his coaching staff.

Lightfoot previously chose New Mexico over scholarship offers from Arizona State, Creighton, Grand Canyon, Northern Arizona and the University of Portland.  Now look for many more college programs to begin to extend offers to the talented post prospect - making it very interesting for Lightfoot and his family.

Lightfoot is a very nice talent with broad shoulders and a nice physical frame that should add weight very nicely over time.  In fact, Lightfoot will easily be able to add 20-30 pounds of muscle to his now thin frame over time – a fact that will take his game to a completely different level over the next 3 to 4 years.  He already possesses a strong feel for the game and a nice overall skillset, which allows him to make plays inside the post or from the perimeter, where he has developed a great deal over the past year.

Lightfoot will now travel with his club program, the Arizona Power, to the Double Pump Spring Classic in Las Vegas, Nevada, this weekend.  The Power will be a very talented team this club season.  Also joining Lightfoot on the team will be University of Colorado commit, 6-foot-4 junior Cameron Satterwhite - fresh off one of the biggest college commitments in recent years.