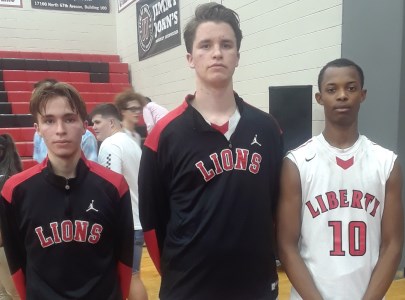 Head Coach Mark Wood and his Liberty Lions would take on Vista Grande - coming fresh off an impressive come-from-behind 99-93 road victory over Willow Canyon HS on Tuesday night.  While Vista Grande did not come into the match-up with the very talented Lions with a great record, I was looking forward to seeing their 5-foot-11 talented freshman guard Rai’Shun Wilson square up against Liberty’s star 6-foot-1 junior Josh Ursery.

Liberty would pull out of the gates cold as freezer peas, missing wide-open looks, and over-committing on the defensive end, while Vista Grande would get out to an early 5-0 lead to start the game.

The Lions would come out of a time-out in a full court press, as their 6-foot-6 senior forward and Montana State commit Quentin Guliford would score back-to-back buckets, to tie the score in the early going.  A minute later, Liberty’s 5-foot-10 junior point guard Jacob Edahl would pull a jack-move on Wilson, and pull up from 3 - giving his team a 5-point lead.  However, Liberty would catch a huge blow to the gut on the next defensive possession, as Guliford would come down awkward on his knee and hobble over to the bench.  But Liberty would keep on pushing, as Ursery would throw down a monster 2-hand slam with less than 4 minutes to go to bring their crowd to their feet.

However, they would continue to have mental lapses on the defensive end, allowing Vista Grande to stick around in the opening quarter.  The Spartans’ senior guard Ulysses Roman hit a 3-ball to tie the game at 14 with 2:30 left in the period.  Wilson would flash some of his great athleticism with a steal and a transition slam dunk with just over a minute to go.

Edahl would end the quarter in style by launching a ¾ court shot, and banking it in at the buzzer to give the Lions a 21-17 lead.

After an Ursery transition bucket would start the 2nd quarter, 6-foot-6 senior forward Connor Ray would hit back-to-back threes to make it 31-24 with 5 minutes to go until the half.

Wilson would get an impressive up-and-under move under the basket in traffic to bring Vista to within 4, just a minute later.  However, the gym would get rocking for their home team once again, as Edahl would deliver a pin-point alley-oop pass to Ursery for a high-flying two-hand dunk on an inbounds play, as Ursery looked like he could’ve kissed the rim.

A minute later, Edahl’s 3-pointer would give his team their first double-digit lead of the game, as they would go up 10.  Shortly after, Edahl would continue to perform at a high level, as he paid homage to Jason “White Chocolate” Williams with an under-the-legs, no-look dime to Ray for an open 3-pointer, while Connor would knock it down from deep to help pull the Lions away 46-28, with just a minute left in what was a competitive contest early.

The Lions were just simply too much for the Spartans in the 2nd quarter, as they overwhelmed them with a 19-0 run to go into the locker rooms up 52-28.

The second half would be much of the same, as the trio of Edahl, Ray and Ursery just dominated Vista Grande for (3) quarters, and the Liberty bench would take over in the 4th period to keep the onslaught in-tact.  Ray would connect on (5) 3-pointers to add to his total on the season, that is tops in the state, and pitched in a game-high 23 points.  Edahl finished with 17 and Ursery with 13 in about 3 quarters of play in the lopsided 103-52 win.

Scouting Notes:  Though the game was a blowout and Vista Grande is just out-manned in games like this, you can see why Raishun Wilson is considered one of the top freshman in the state.  His combination of strength, athleticism and toughness makes him one to keep an eye on moving into the future.  The lefty has a strong ability to get to the rack, and is athletic enough to finish over opposing big men. He also has a good touch on his shot from the outside and mid-range.  A little work on his ballhandling and on-ball defense should be a point of emphasis for him, but he is fast and explosive, so the tools you can’t teach are there.

Josh Ursery has a chance to be something big at the next level.  He is definitely a joy to watch, especially on a team with this style of play.

Edahl just impresses me more and more every time I watch him play.  He is not just a hard-nosed type of player; He is a pure point guard.  He has a shot that you better respect, because he has no problem shooting you to the bench.  He is an active defender and, while he is undersized and will never play anywhere near the rim, he has some sneaky athleticism and some flavor to his game.

I will say this one more time, Connor Ray is the best 3-point shooter in the state, and I don’t even think I have seen a close second.

While the win was impressive, it did come at a huge cost with the loss of their do-it-all forward Quentin Guliford.  If he is done for the season, that will hurt them big time when they get ready for the playoffs.  Yes, the group is talented enough to make something happen, but Guliford's presence will be missed against teams that have inside presences and length.  Only time will tell, but Liberty has the pieces to put that puzzle back together.