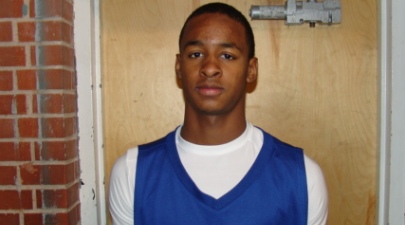 He would not slow down Wednesday evening in a 80-67 Division-II quarterfinal playoff win over Tucson's Salpointe HS, as the star guard would rain another monster scoring performance - but this time it would be against a much stronger opponent.

Larry Lewis would get hot in the second period, knocking down shot after shot to keep the game close for Arcadia. Salpointe's 6-foot-5 senior Shawn Soelter would also get red hot - connecting on 5 three-pointers in the first half.

Salpointe would take a 37-35 lead at the half after a layup at the buzzer from talented 6-foot-1 sophomore guard Cameron Denson after a steal.

Larry Lewis would finish with 22 first half points, and eventually an eye-popping 42 points in the game.

After Salpointe would keep the game very close in the third period, and with Arcadia holding on to a 57-52 lead heading into the fourth period, the Titans would get it going in the game's final period.

Arcadia would cruise to a 80-67 playoff win - advancing to the Division-II semi-finals Thursday where they will face a very talented and strong Peoria HS team at Grand Canyon University.