Legendary Paul Suber Getting It Done In Arizona 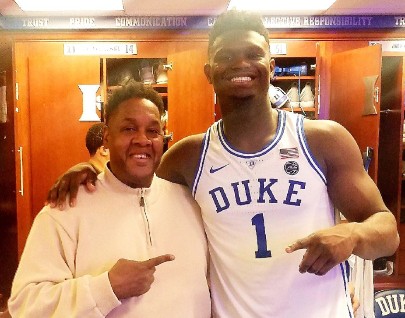 Something is very different about New York City club high school basketball coaching legend Paul Suber. As you meet him in person, watch him taking photos with players and prospects, or observe his workouts, you quickly realize that he is different from anyone you have ever met - definitely in the state of Arizona. A major reason for his differences are that he is from a completed different world - the culture of New York City basketball. After coaching in New York for more than 20+ successful years of elite-level basketball, Suber moved to the state of Arizona in 2015, and now is building a new legacy for himself and others.

In Suber's illustrious coaching career began in 1995 with New York Riverside Church and the New York Gauchos. Suber led his team's to many major tournament wins and hundreds of game victories. Throughout his long coaching career, Suber has placed more than (200) kids in college on Division-I scholarships, and has coached (19) different NBA Players. Suber coached Riverside Church to the first ever Nike EYBL Championship in 1997.

Arizona Preps asked Suber what brought him to the state of Arizona, after such a long and illustrious career in New York.

"We use to always come out here for the BCI (Arizona)," said Suber. "We won that a few times in Colorado, then they moved it to Arizona. We would come out here all the time for the BCI. One of my former players told me that the cost of living in Arizona was not bad at all - especially compared to New York. It was a no-brainer."

In the future, Suber still wants to work with the youth, but may have an opportunity to go into scouting for the NBA. He would also like to open his own gym in Arizona, at some point.

"I'm a big fundamentalist," said Suber. "I'm into basketball fundamentals. You can't be working on cross-over dribbles and step-backs, and can't shoot a mid-range jumper. I like to teach kids how to play the game."

Suber is quickly building a strong reputation in the Arizona basketball community for developing players at a high level, and also having the players he works with produce at college programs all over the country. His latest product, former Perry High School 2019 graduate Jalen Williams, looks to be another player in Suber's long line of future and current pros. Williams is coming off an excellent freshman season in the West Coast Conference for Santa Clara University.

Over the past several years, Suber has been a consistent supporter and contributor to the Arizona Preps' social media outlets - providing photos and game top performers after numerous high school games. His support has been a huge help to our organization and to our viewers/followers.

Suber is honestly one of the very best coaches and teachers of the game that I have ever met. He has a huge love for the game of basketball rarely seen, but he also has a huge heart and love for others. He takes sincere pride in helping aid in the success of today's student-athletes all over the country, but especially in the state of Arizona now where he is getting it done at a high level.

Arizona Preps would like to thank Coach Paul Suber for all he has done for us, and everything he has done and continues to do for the Arizona basketball community.