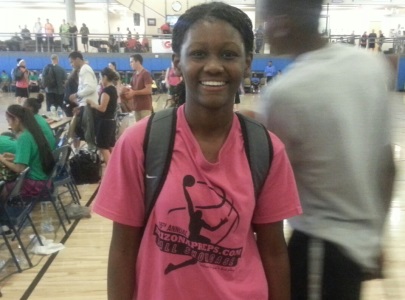 While many basketball enthusiasts around the state have quickly began to notice the name Cameron Satterwhite, his younger sister may just end up being the better college prospect.  While Cameron is a top-rated young prospect of his own already as a mere sophomore prospect in the state, Gilbert Christian High School's 5-foot-6 freshman point guard Lauryn Satterwhite is preparing to make her impact felt on the Arizona varsity level this season.

After the completion to a storied middle school basketball career, Satterwhite is now set to take center stage on the Arizona high school basketball varsity level.  Satterwhite has been regarded by many around the state as the state's top prospect in Arizona's 2017 class of girls prospects, and she looks to be ready for the challenge.

I have followed Satterwhite as a player over the past two years, and am very excited about her future at the high school varsity level.  She is a flat out superstar in the making, and has the potential to become a serious high-major division-I prospect over time.

I recently came away very impressed with her performance in this year's Arizona Preps Fall Showcase, as she competed hard and held her own with some of the state's top overall girl's basketball talent.  Her ability to play the game at such a young age is almost breathtaking, as she knows how to run a team very well already and makes players around her better.  She is a big-time scorer already as a youngster, and is able to create scoring opportunities for herself or others off the dribble.

Gilbert Christian head coach Daryl Young will have some decisions to make this high school season, as the talented young point guard prospect Satterwhite takes over the point guard duties for his team - just how fast to allow her to develop.  Pull back the reigns or let her go.

Arizona Hoop Review Scouting Report:  One of the best young point guard prospects in the state.  Satterwhite is a crafty and skilled left-hander with a nice shooting stroke and a very good feel for the game at a young age.  She is a very good ball handler and is able to make plays for herself off the dribble.  A good passer as well with good court vision, Satterwhite is a very talented young prospect with loads of potential.  Also a good defender that should develop a great deal in this area over time.  Satterwhite is the younger sister of top-rated underclassman boy’s prospect Cameron Satterwhite.  A future high-major division-I prospect.