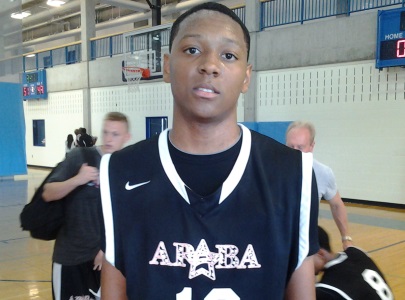 Day two of action in Las Vegas was exciting once again with each of Arizona's top club teams in action.  Our staff was back at it again - running around all day from gym to gym to catch as much action as possible.  After catching many games on the day and witnessing some strong performances, the day was dampened by a severe knee injury suffered by Gilbert Christian High School's talented 6-foot-4 senior guard Cameron Satterwhite (University of Colorado commit).

The injury came in his team's exciting match-up with the heavily Nike-sponsored Houston Hoops (TX) team.  While facing Houston Hoops on the main floor of the Bigfoot Hoops tournament, Satterwhite would travel the length of the floor before taking flight high above the rim and throwing down a monster one-handed dunk in traffic.  After coming down from his impressive dunk, Satterwhite would land wrong on his leg and injure his knee severely.  The injury would cause Satterwhite to leave the game, as he would be helped off the floor by his Arizona Power teammates.

It is still unclear as to the severity of the knee, but it looks like a torn ACL, which should cause Satterwhite to miss his senior season of high school basketball.  Satterwhite is such an athletic specimen, that he should have no problems overcoming this setback.  I really feel for this young man and am very disappointed that I will not be able to see him play in Vegas the remainder of this week.  What a talent.  I wish him and his family the best in his recovery.

With Satterwhite out of the game, the Arizona Power would compete, but eventually fall to the Houston Hoops as their superstar guard De'Aaron Fox would completely go off in his team's win - the best individual performance I have seen thus far in Vegas.  Fox would earn an offer from the University of Kentucky following the game.

Gilbert Christian HS 6-foot-9 senior post Mitch Lightfoot would play very strong in the contest, finishing very strong on dunks over defenders and also making shots from the perimeter.  Overall, Lightfoot's performance, while his team lost the game convincingly, was one of his best performances.  Lightfoot showed an ability to score inside and out and also competed hard on the glass.  In the game, it was very prevalent that Lightfoot has a serious mean streak inside of him - something that I like, which will suit him nicely over time.  University of Kansas head coach Bill Self and University of Arizona head coach Sean Miller sat together courtside, while Grand Canyon University head coach Dan Majerle also sat courtside to catch the game . . .

Gilbert HS 6-foot-7 senior wing Chris Bowling had an excellent day for himself.  After a subpar performance on Thursday, Bowling came back on Friday to lead his Arizona Magic Elite team to a nice win over a talented group of prospects from Houston, Texas.  Bowling shot the basketball very well and with range from the perimeter, and also scored effectively around the basket.  Bowling is a hybrid wing Saben Leeprospect that has made a lot of noise in July with his consistent play, but the offers and recruiting interest have not been to the level of his play necessarily.  Idaho State and Texas State look to be the early leaders currently for Bowling . . .

No other Arizona 2017 prospect has been hotter in the last month than Corona Del Sol HS 6-foot junior point guard Saben Lee.  In the last month, Lee has picked up offers from such schools as New Mexico, Idaho State, San Diego, Northern Arizona, Northern Colorado, Grand Canyon, Portland, Portland State and Weber State.  Lee plays for the Arizona Power Black, and he played very well in his team's loss on Friday evening.  He controls the tempo of the offense and knows how to run a team efficiently.  While he needs some work his perimeter shooting, Lee has very good athleticism and a high motor, which makes him a very nice prospect for the future.  Lee has emerged this July and will move up significantly in the player rankings for Arizona's 2017 class . . .

Another prospect that will move up significantly in Arizona's 2017 class is Apollo HS 6-foot junior point guard De Marin.  No prospect in Arizona's 2017 class has been better this July than Marin.  Marin has torched his competition consistently in July - putting up one strong performance after another.  Marin would suffer would looked to be a possible concussion on Friday, but would return in the same game and make (5) consecutive three-point shots to help his team late.

In his team's second contest on Friday evening, Marin would explode for a game-high 39 points in his team's big win.  After his performance, Marin would earn an offer from Idaho State head coach Bill Evans.  Marin has also received an offer this July from Texas Pan America.  This young man is a handful on the basketball court and play hard on both ends, and gives his opponents serious trouble.  Marin will move up the player rankings for the 2017 class significantly, and will also have a huge junior season at Apollo HS . .

Moon Valley HS 6-foot-6 senior forward Bryce Cheney has really improved over the past several months and his body looks great.  Cheney is an explosive athlete with nice overall skillset.  He threw down a nice dunk on the break early in his team's loss, and also showed a good ability to make shots from the perimeter.  He still needs to add more consistency to his ability to make shots beyond the arc, but this young man is a nice looking prospect that should begin to garner low to mid-major division-I interest.  Very few prospects have his combination of size and athleticism.  Cheney currently has an offer on the table from Weber State . . .