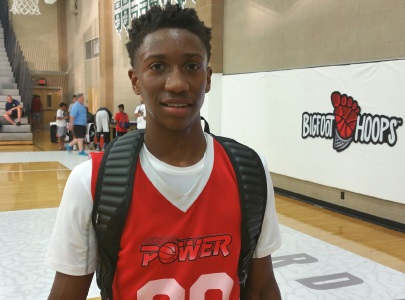 Arizona Preps was on hand to cover the final NCAA evaluation period during the summer in Las Vegas, and covered all of the Arizona teams that participated in a variety of tournaments that were taking place all over the city.  Of the kids that I personally saw, here are my top 5 performers from the 17U level from the week (in no particular order) . . .

Gardner was hands down one of the best Arizona prospects that was on display this week in Las Vegas.  Gardner has a solid shooting stroke that can extend out to 23 feet comfortably, and he can also put the ball of the floor and get to the basket, due to his long strides and quick first step.  One part of Gardner’s game that really stood out was how well he excelled in transition, and used his superior athleticism to either finish fast breaks with a dunk, or draw the foul and go to the line.  Gardner is also alert on defense and made several steals on the weekend, due to his lateral quickness and alert hands.  Gardner had a very good last evaluation period and should have a monster senior season for Tri-City Christian Academy, along with elite 2017 big Nigel Shadd.  He currently holds offers from Air Force, Central Arkansas, Columbia, Dartmouth, Liberty, and UC Davis.

No one’s stock in the state of Arizona has risen more during the summer evaluation periods than 2017 PG Saben Lee.  A lighting quick guard, Lee was able to break down nearly every defender this weekend, due to his speed off of the dribble, as well as a steady handle of the basketball.  Lee also has great vision on the court as he always has his head up looking for open cutters in a half-court set, as well as in transition.  His jumpshot is a work in progress, but once it develops and he is able to knock down shots at a consistent rate, he will be a load to deal with on a nightly basis.  Lee also is a very good defender and he is always aware where the ball and his man are on the court.  He also has very active hands and is able to body and cut people off before they are able to get where they want on the court.  Look for Lee to be one of the most elite prospects in Arizona’s 2017 class.  He currently holds offers from New Mexico, Idaho State, Northern Arizona, Portland, Portland State, Weber State, San Diego, Grand Canyon, and Northern Colorado.

After a long summer in which he traveled around the country for a variety of high level events, such as the Under Armour All American Camp.  Lightfoot still brought it the whole week in Las Vegas and performed at a very high level on both ends of the floor. He helped lead his Arizona Power Black team to a big win over the Arizona Warriors with his high intensity on both ends of the court - able to bang and score down low, and great reads on the defensive end. Here is a scouting report on Mitch Lightfoot.

“Lightfoot is one of the more elite prospects on the West Coast. One of the first things that stands out about Lightfoot is how hard he competes on both ends of the floor.  On the offensive end of the floor, he uses his large frame and wingspan to create space down low and score/ dunk the ball with authority.  He also thrives off of contact on the block and converts at a high rate.  He demonstrates solid footwork on the block and is able to hit shots just out to the 3-point line.  On defense, Lightfoot is always mobile and aware of where he is.  He is a solid rebounder and a better shot-blocker, as he reads what the offensive player is going to do before he makes his own defensive adjustments.  He currently holds offers from Kansas, Vanderbilt, Utah, Creighton, Arizona, Nebraska, and is getting interest from a variety of other schools.”

Novogratz is a new addition to the Arizona Magic Elite team as he joined the team during the GASO tournament in Dallas after leaving his former team, the LA Rockfish.  An extremely vocal player/ leader on the court, Novogratz was a huge factor in the Arizona Magic Elite getting some big wins this weekend.  Novogratz has a very stead handle of the basketball from the PG position and committed nearly no turnovers all weekend.  He is able to break players down off of the dribble, where he can draw a foul in the lane or spray out to one of his many open shooters.  He is also an able shooter who can knock down the open 3, but he looks to feel more comfortable shooting the ball from mid-range and in. Something that stood out to me about Novogratz is how hard he competes on the defensive end.  He created many steals and scoring opportunities for his teammates by how hard he defended and the pressure he applied on the ball handlers.  Novogratz should have a great senior season in Los Angeles, and we will be tracking his progress.  Wolfgang currently has an offer from Nevada and has interest from many programs such as Texas State, Yale, California, Villanova, Davidson, Brown, Princeton, Harvard, and many others.

This was one of the first times that I had seen Lowell in person and I came away very impressed with him after his performances this weekend.  A long, lengthy wing - one of the best parts of Lowell’s game is that he possesses a very quick, clean shooting stroke from all over the court and he converts at a fairly high rate.  Lowell also knows how to use his frame and size to his advantage on the offensive end.  On different occasions, Lowell would see that he had a smaller defender on him and he would post him up and score, draw a foul and go to the line, or would pull up over the defender, due to the fact he knew he was in a superior offensive position. Lowell is also very solid on the defensive end, as he made blocks on several players - using his athleticism to stop them from scoring the ball over or around him.  Lowell has as much upside as anyone in Arizona’s 2016 class, and I expect a big senior year out of him. Lowell currently holds offers from Oklahoma State, Weber State, UC Davis, Rice, Utah Valley, San Diego, Lehigh, Northern Arizona, and Colgate.