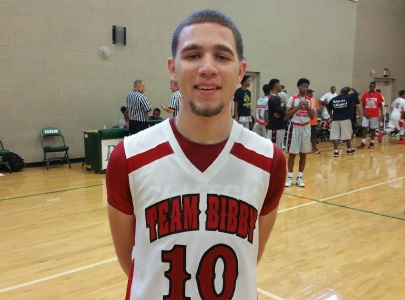 The city of Vegas, while being in the basketball tournament business for many years, has never seen this many top-rated college prospects and college coaches in the state of Nevada at one time.  Never before have we seen teams from all three shoe companies in participation in the state at one time - Adidas, Nike and Under Armour teams all in action.  While Reebok was formerly factored into the equation, now Under Armour has taken their place among the competition, as one of the featured shoe companies to sponsor top-rated basketball programs across the country.

Nike has not had an event previously in Vegas during the evaluation period, but now they have gotten behind tournament director Hal Pastner and his Bigfoot Hoops event - the Las Vegas Classic.  Nike has made the event their own and they have sponsored the event with Jumpman logos and marketing material that have brought the event to life - especially on their main floor which looks terrific to play on.  Each of the top Nike EYBL teams are featured in this event, with many non-sponsored teams making up the field.

The Fab 48 event is a non-sponsored event, organized by basketball aficionados Dinos Trigonis and Gary Charles, the event is filled with many top-rated unsponsored programs and also some scattered sponsored teams also - making for an exciting event.

With some of the action kicking off on Wednesday evening, the Arizona Preps' staff was out in full force on Thursday - venturing between all three different events on the day and seeing a lot of Arizona prospects in action.

No Arizona prospect helped themselves more on Thursday than Shadow Mountain High School's 6-foot-1 senior guard Michael Bibby Jr. (pictured)  After sitting out much of the 2014-2015 high school basketball season, Bibby returned to action in the spring, during the NCAA spring evaluation period, and looked great.  He looked even better on Thursday, as he led his Team Bibby Red team to an impressive victory over Giving Back Team Sangare (Senegal).  In the win, Bibby orchestrated the offense for his team efficiently and knifed up the opposing team's defense with his ball handling and superior court vision.  While Bibby had numerous turnovers in the win, while trying to thread passes through the teeth of the defense, he spent much more time finding his open teammates on the floor and knocking down three-point attempts with defenders draped all over him.

As a result of Bibby's performance, many college coaches showed strong interest in the talented guard prospect during the win.  An assistant coach from Purdue showed superior interest in Bibby during the game and so an offer could be coming soon.  Look for much more recruiting interest to begin to heat up for Bibby this week, especially if he continues to play at this level amidst such top-rated competition . . .

Williams Field High School is not known for producing division-I prospects, but 6-foot-9 senior forward Wyatt Lowell will be their biggest and best, thus far.  Lowell is a long and lean wing prospect with a nice overall skillset and good overall versatility.  While Lowell's Arizona Warriors club team would drop their first two games of the Bigfoot Hoops' event, Lowell would impress many college coaches in the process.  Assistant coaches from such schools as Clemson have shown extreme interest in Lowell.  It was also rumored that Lowell received an offer last week from Oklahoma State, so Lowell is now one of the hottest uncommitted prospects in Arizona's 2016 class . . .

Sunrise Mountain HS 6-foot-6 senior wing Elijah Thomas did not particularly have a great day in his team's loss at the Fab 48 event, as his team just looked tired after a long drive to Texas for the GASO event last week.  Thomas did have a long list of college coaches in attendance to catch his game, including the entire staff from Long Beach State.  Thomas recently received offers from Fresno State and Colorado State . . .

Tri-City Christian High School's talented 6-foot-6 senior wing Brock Gardner played well on Thursday and showed a good overall skill level in his team's loss.  Gardner is picking up recruiting interest as well, and had numerous college programs in attendance looking to gain on their position with him . . .

St. Mary's High School's gifted 6-foot-10 sophomore post KJ Hymes looked impressive on Thursday, and also looks to have grown physically since we last  saw him.  Hymes' versatility as a lengthy 3/4 combo-forward for the future has many college programs excited about him.  This young man is a big-time prospect for the future and he looks to be developing nicely . . .

Apollo HS 5-foot-11 junior point guard Holland Woods Jr. is having an excellent July evaluation period for himself, and he played great in his team's loss on Thursday.  Woods is a ball-hawk and when he has the ball in his hands, good things happen for his team.  Woods has received his first offer from Long Island University, and he is just beginning to scratch the surface on how good he will become . . .

Shadow Mountain HS 6-foot-8, 235-pound senior post Isaiah Jones had an excellent day for himself on Thurday.  The Austin, Texas native played strong on the glass and finished strong inside the paint.  Jones has been almost a forgotten man on the Team Bibby roster, but his value was exemplary on Thursday, as he gave his team a strong inside presence against a team from Senegal that was long and athletic.  Jones is a very underrated prospect that should begin to garner some recruiting interest from smaller college programs.  An excellent prospect for a smaller division-I program looking for size . . .

Montana native, Horizon HS 6-foot-5 rising senior forward Aaron Weidenaar recently moved to the state of Arizona from the state of Montana, and he looks to make a bang with his addition to the state.  Weidenaar was regarded among the top prospects in Montana before moving.  He is a good-sized wing prospect with a very nice shooting stroke with range - his best asset.  He is able to score inside and out, but becomes a mis-match on the perimeter for players his size.  He also looks very comfortable on the wing, although he will probably see much of his time next season in the post for Horizon.  Weidenaar has a good looking body, with solid athleticism.  He competes hard and plays with good intensity.  He is also a good low post scorer and active rebounder, also a solid finisher.

Weidenaar has given an early verbal commitment to Central Arkansas and head coach Russ Pennell and his staff.  Weidenaar is playing for the Arizona Power Black in Vegas.