Lamin Sabally On The Rise, Has 2 Offers 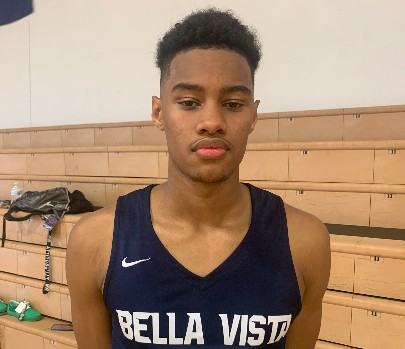 Bella Vista Prep is again on the rise in prep basketball locally and nationally, as the program has retooled and will be very talented this season with a variety of basketball prospects to take a hard look at. One of the program's prospects that is also on the rise is 6-foot-6, 185-pound wing prospect Lamin Sabally. A native of Berlin, Germany, Sabally is not a prospect that most college coaches have had an opportunity to see perform in person, as of yet, but schools are already beginning to position themselves for this talented prospect.

Sabally is new to the Bella Vista Prep basketball program, and he immediately will be inserted into a strong lineup that seems to be very talented and ready for a big prep season. Sabally's excellent length, size and versatility will be very important to the success of this year's Bella Vista program, as he is a prospect that is able to impact the game in a variety of ways.

Sabally has very good size for the wing position, and he is able to play several positions on the floor, which will benefit new Head Coach Corey Boswell in his pursuit to win basketball games this prep season. Sabally can play as a guard or as a wing, although his best position on the floor is as a wing, where he is able to handle the basketball and make plays for himself and his teammates. He has a very good overall skillset, when you consider that he is an international-bred prospect with an advanced offensive ability for his size and length. He is a good shooter of the basketball with some range, but is at his best from mid-range and also while slashing and finishing in traffic or in the open court. He is a good ball handler for his size and also can facilitate, as needed by his team. He is a good and willing passer as well, another nice attribute that he has.

Sabally's length and size allows him to rebound nicely and finish plays effectively around the basket. He is a strong finisher at the rim and should only continue to improve over time, as he matures and gets physically stronger. He runs the floor very well and is a good finisher. He has serious upside for the future - a very intriguing prospect.

Currently, Sabally has offers from Texas-San Antonio (UTSA) and Northern Arizona (NAU) on the table, as both college programs have stepped up early in their recruitment of him. I expect him to attract much more recruiting interest this prep season, as college programs catch him in action and figure him out. He is another prospect on the Bella Vista Prep roster that should benefit a great deal this prep season, while playing on the Grind Session, and also playing a very competitive national schedule this season.

I look forward to watching Sabally's recruitment develop this season, as he could become a very sought after recruiting target with a strong prep season for himself. He definitely has the physical tools and looks the part.