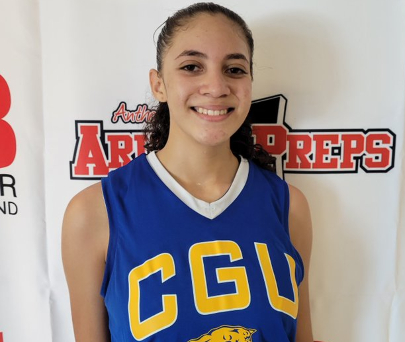 Standing at 6-foot-1, Casa Grande Union’s senior post Aliyah Robbins will be a force to be reckoned with in the 5A Division this up-coming season. Last season, she helped her team improve their overall win-loss record by averaging 12 points, 10.4 rebounds, 1 assist, 1.5 steals and 1 block per/game.

I was able to see Robbins perform at our 1st Annual Beat the Heat Team Showcase in Prescott Valley, AZ in June. She led her team in scoring and rebounds (double-double), and helped her team to a 4-0 record in the event. Robbins has excellent size and athleticism for the post position.  She has a soft touch and great finishing ability around the rim. She has improved tremendously from when I first saw her at our previous Arizona Preps Fall Showcase. She has added a nice mid-range jump-shot. She defends the paint well and has a knack for getting rebounds.

Her ability to lead by example, really makes her an excellent addition for any college program. She seems to be a blue-collar prospect by making her presence known and felt inside, on both ends of the floor. She has a high ceiling as she has the desire to improve her game by proving herself with commitment and serious work ethic.

She is another prospect who is under-the-radar, and I believe she would make a fantastic college prospect as a power-forward or center.

Coach Kevin Hubbard has the foundation to help lead his Lady Cougars to the 5A State Playoffs this upcoming season. College coaches keep an eye on Robbins, as she is set to have a breakout season this year.