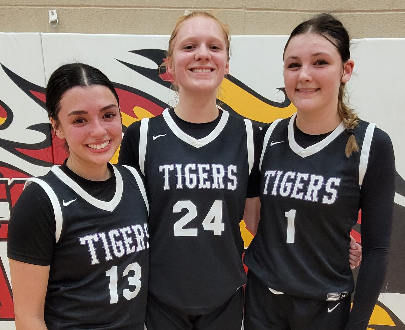 In one of the most exciting times of the year, the Hoophall West is back in Arizona. (6) high school girl's teams tipped off at Chaparral High School to include Salpointe Catholic, Millennium, Mater Dei (CA), Perry, Sandra Day O’Connor, and host school Chaparral. The final scores were:

Here are some of my takeaways from the games:

The Lady Tigers aren’t missing a beat under new leadership in Coach Danny Soliman. They are a deep team with a lot of skilled prospects. Their guard play is what stood out to me in junior point guard Elli Guiney and senior combo-guard Mia Amundsen.  The X-Factor is the presence of do-it-all senior guard/forward Bella Barrett who is strong and talented enough to play both inside and out. I project the Lady Tigers making a deep run in the open division playoffs.

The Lady Lancers had a slow start, however showed tenacity despite the early deficit. The reigning 4A State Champions are missing graduated backcourt members Tessa Hastings and Kylee Callahan, however they still have returning senior point guard Bria Medina. You add in sophomore forwards Hannah Williams and Taliyah Henderson and the Lady Lancers have a formidable Big Three. The X-Factor will be the growing role of sophomore guard Jolee Nelson and strong contributions from the Big Three, night in and night out. Coach Joe Luevano will get his team ready for the playoffs and his Lady Lancers will be in postseason form in no time.

Coach Andrew Curtis has his team playing some good basketball early on. Despite the loss to a really good Mater Dei (CA) team, his Lady Pumas are showing promise to be one of the teams that will be hard to beat. Anchored by Vanderbilt signee senior forward Khamil Pierre, the Lady Pumas have one of the top frontcourts in the state with Pierre and senior center Lauren Crocker. The X-Factor that will make Perry return to the Championship game will be strong contributions from guards Jayla Cal, Sage Henry, Ella Murakami, and Hannah Strauss. Henry impressed with her range and play-making ability. Cal, Murakami and Strauss are capable of being threats if forgotten about.

The Lady Eagles are a team that plays well together and is fundamentally sound. Under new leadership in Coach Charles Wilson, the team does not look like it will miss a beat this season. The Lady Eagles will rely on the play of Mak Snyder, Katy Frost, Kaitlyn Elsholz, and Taeja Bartee. This team is a tough match-up, because all four of those players can put up numbers to light up the scoreboard, however the rest of the team and reserves are also very talented. The X-Factor of this team is their defense. Coach Wilson employs a defense, which can stifle teams and disrupt offensive rhythm and flow. I anticipate the Lady Eagles making a deep playoff run behind their depth and stifling defense.

Barrett is a solid inside presence who can handle the rock, defend, and impose her will offensively. My favorite attribute is how she can play inside and outside, which makes her a match-up problem for opposing teams.

Guiney is a bright talent in the 2024 class. She has an amazing feel and IQ for the game. She can hurt you in different ways, especially when she moves without the ball to cut to open areas to create quality offensive looks. Besides being a three-level scoring threat, Guiney has amazing vision and passing ability to put teammates into scoring position.

Amundsen is a bucket. She has a nice stroke with quick release. Besides being able to convert from long range, Amundsen can score inside and at the mid-range. She is one of the key pieces to why her team will make a deep playoff run. One of my favorite impact players in the state.

Medina has always been one of my favorite guard prospects in the state, as she plays with a lot of passion and fire. Her intensity helps create offensive and defensive opportunities for her and her team. She is very underrated and had an amazing performance, despite coming up short against a talented Millenium team. For colleges looking for a player with high IQ, play-making ability and intensity, Medina would be a steal for your program.

Henderson is an athletic prodigy who has the size, athleticism and skill to guard anyone on the floor. Offensively, she hinders weaker and slower players, as she is able to take them off the dribble to get the shot she desires. She got into foul trouble, which hindered her performance this game, but she will bounce back. Currently, she has offers pouring in with the latest school to offer in Arizona State University. I anticipate her recruitment to catch fire going into the spring and summer.

Pierce ignited a barrage of plays to help her team stay competitive against a very talented Mater Dei (CA) squad. She led all scorers with 30 points, as she was able to utilize her length to get to the rim and finish. Pierce is an inside presence with her rebounding and post defense ability. I am sure the Vanderbilt fan base will be excited to follow her next season.

Henry caught my attention as a playmaker with smooth handles. She is a three-level scorer who plays with good energy. Henry is a bucket, displaying that she is fearless and has the confidence to hit buckets in clutch. I am excited to follow her career, as she will be a solid college prospect. Coaches need to start getting involved.

Cotton is an elite talent who has an extremely high basketball IQ. She thrives in the pick and roll and has very impressive footwork. Besides those attributes she finishes well through contact, an excellent passer and cleans the glass well. A high major prospect who’s recruiting stock continues to rise.

Elisadez has an excellent motor and an elite floor general. Her ability to impact a game is why Mater Dei will make a deep playoff run this season. I like how she sees the floor, puts her teammates into scoring positions and defends.

Deal is the real deal as she has tight handles, range, and play-making ability. She gets active on the glass and defends well. I anticipate her recruiting stock to heat up this spring and summer, as she passes the eye test.

Despite her team coming up short to a talented Sandra Day O’Connor squad, Ostlie had a good performance. She is a three level scorer who has a tight handle and good confidence. A solid sleeper prospect.

Snyder is a potent guard who has a strap! She can score at all three levels and is a great defender. Snyder has a good feel for the game and makes sound decisions. She is one of the most underrated prospects in the state. College coaches put this young lady on your radar.

Elsholz is a game changer. She slashes to the basket and finishes well. Although naturally a wing, she plays big inside by defending opposing posts and rebounds well for her size. Another solid prospect with tremendous upside.