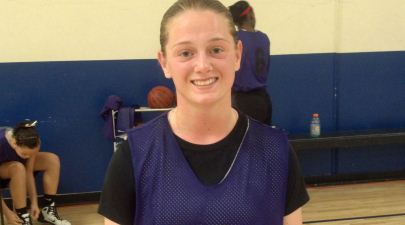 While only being in existence for five full seasons now, it is too early to regard Valley Vista as a powerhouse basketball program in the state - especially since the school is rather new and still developing it's girl's program.  But the program is definitely on the rise as the Monsoon have recorded winning records in each of their last four seasons of play - compiling an impressive record of 88 wins and only 24 losses in the last fours seasons of action.

And the program is coming off an excellent year this season as the team finished with an impressive 26-8 record in the state's tough Division-I Class.  Led by head coach Rachel Matakas, the Monsoon were among the state's best teams again this season and finished in the second round of this year's Division-I state playoffs - falling at the hands of Desert Vista High School, 73-48.

A major reason for the team's success this season was the play of 5-foot-7, 130-pound junior point guard prospect Lacey Viselli.  Viselli has been a major contributor at Valley Vista HS since her freshman season - playing at the varsity level each of her three seasons thus far in high school athletics.

Each season of her high school career, Viselli has been a major factor for the Monsoon, and her junior season was her best of all - averaging 13.1 points, 5.8 rebounds, 2.5 assists and a team-high 3.4 steals per/game.

Viselli is a tough and hard-nosed point guard prospect with a very good shooting stroke and a nice handle of the basketball - capable of getting to the basket and making plays for herself or others.  She has a nice shooting touch from the perimeter with range and also a solid mid-range game as well.  She plays with a nice swagger and seems to really enjoy playing the game of basketball.  She pushes the basketball up the floor and looks for the open player.  She is also a very good defender with quick hands and has good lateral quickness.

"She has improved a lot and is now more consistent," said Carolyn Jones - Viselli's club coach with the Arizona Venom.  "She has also really improved her intensity."

Viselli has already began to see her share of college recruitment this spring while competing on the club circuit, as such division-I programs as Idaho State are now involved.   Look for Viselli to attract much more attention throughout the summer months, as she teams up with 5-foot-7 junior guard Albani Hardy from Greenway HS on the Venom.

"I have to have her on the court," said Carolyn Jones.

Viselli will continue to develop as a player, and is already among the state's top guard prospects in the 2013 recruiting class.