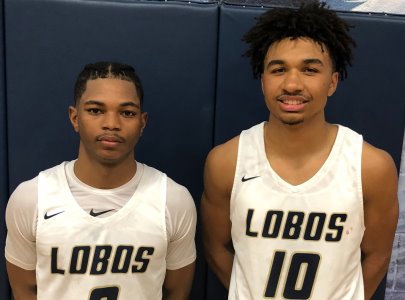 La Joya Community High School (11-6) has a lot of quickness and athleticism on their roster this season, as Head Coach Roger Lefebvre and a very talented coaching staff have put together a nice group this season.  After losing a few games early this season, the LObos have seemed to put it together - winning 9 of their last 12 games on the season in the 6A Division.

On Friday evening on the road at Copper Canyon HS, after a very competitive first half turned in by both teams, La Joya would quickly lose their narrow lead in the third period to Copper Canyon, after a three-pointer from senior guard F. Canales - giving Copper Canyon a narrow 38-37 lead with 6 minutes left in the period.

But La Joya would storm back behind intense defensive pressure and force (9) turnovers in the period to blow the game open for the Lobos.

From there, La Joya would not look back and would cruise to a 84-72 road victory.  The team is very good defensively and has good overall athletes, and looks to be prepared to have a strong finish to the 2018-2019 season.

Scouting Notes:  6-foot-1 senior guard Brian Nicholas is a skilled guard prospect with a nice left-handed shooting stroke.  He is a combo-guard that has a very good knack for slashing and finishing at the basket, and is an excellent defender with quick hands and feet.  A very good overall athlete.  A good sleeper guard prospect . . .

5-foot-9 senior guard Alfred Jordan is a quick defensive point guard prospect with quick hands and feet, and sees the floor and pushes the ball ahead to the open man on the court.  His best asset is his ability to defend, but he is a solid shooter with range and is a very good penetrator and finisher as well.  A good point guard prospect . . .

Copper Canyon 6-foot-1 senior guard Byron Wycoff is returning from a knee injury that sidelined him throughout the club season, but he is a nice talent that, once he fully recovers, will be a very good sleeper guard prospect for the future.  Wycoff has an excellent feel for the game and sees the floor quite well, and even sees plays before they happen.  A good shooter of the basketball with a nice handle and is a good finisher at the basket.  A nice talent with promise for the future.