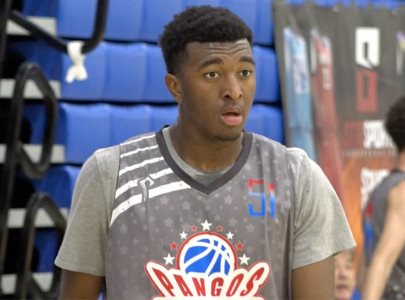 6-foot-4, 210-pound rising sophomore wing prospect Kyree Walker is among the elite overall prospects in America's 2020 Class.  Regarded by many as a Top-3 national prospect in the class, Walker recently announced that he would be leaving Moreau Catholic High School in Hayward, California, to transfer to Hillcrest Prep Academy in Phoenix.  As a result, the Kyree Walker Era @ Hillcrest Prep now begins.

Hillcrest Prep Academy looks to be absolutely loaded with talent next high school season.  Already returning such top-rated national prospects as Josh Green, and reporting such high-profile transfers as rising junior guard Markese Jacobs (University of Kansas commit), rising senior Demarius Jacobs and 6-foot-10 rising senior post KJ Hymes, Hillcrest Prep will be putting a team on the floor this season that looks to be better than last season.  Now with the recent transfer of Kyree Walker, Hillcrest Prep looks to be on another level on paper.

Walker played recently in this year's Pangos All-American Camp, and was one of the top overall performers in the camp.

Walker is generating loads of division-I interest for himself already, of course, and he already possesses an offer from the University of Arizona, and recently received offers from Arizona State and UC-Santa Barbara.  Walker will receive a large number of scholarship offers over the next year, while playing on a national schedule at Hillcrest Prep this season.

The addition of Walker to the Hillcrest Prep program is similar to when DeAndre Ayton or Marvin Bagley transferred to Hillcrest Prep, as he is regarded among the elite prospects in the country.  Ayton and Bagley are physically imposing prospects, unlike anything we have ever seen in America.  Walker is not in the same category as Ayton or Marvin Bagley, but next season the addition of Walker to the Hillcrest program will bring a lot of attention.

The combination of Walker, the Jacobs brothers, Josh Green, KJ Hymes, Dischon Thomas, and numerous other top-rated prospects that are coming to the school, will make Hillcrest Prep Academy a serious contender again with the nation's elite high school programs.  It will be very fun to watch.