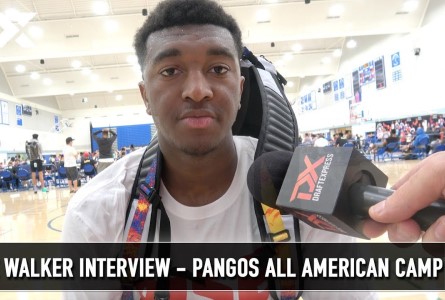 The long wait is finally over for former stud 2020 Class guard prospect Kyree Walker. After staying very quiet about his plans for the future for some time, this past weekend, the 6-foot-5, 205-pound senior guard Kyree Walker announced that he would skip going to normal college route for his future, and, instead, train for a year with the well-known Chameleon BX Training in California, in an attempt to prepare for the 2021 NBA Draft.

Chameleon BX is the ultimate training platform for elite high school basketball players to get prepared for the NBA. Founded by Frank Matrisciano, players work out hard daily during a 12-month program, utilizing a monstrous sand hill to climb alongside many of the elite athletes in the world, from all sports. Many elite NBA and NFL players such as Kevin Durant and Russell Westbrook, and many others have and continue to train with Chameleon BX.

Walker considered many schools before deciding to skip college, as he held numerous scholarship offers for himself, including offers from Kansas, Oregon, Florida, UCLA, Memphis, Arizona State, California, Texas, Arkansas, LSU, Nevada, Illinois, Oklahoma and Grand Canyon, just to name a few schools. Walker had also previously given an early verbal commitment to to the Arizona State Sun Devils as a freshman, before deciding to re-open his college recruitment almost two years ago.

Walker traveled his last two spring and summers with his club program, the heavily Adidas sponsored Dream Vision club program. Walker put on a show with his electric style of play, size, strength and overall experience and feel for the game.

Walker is among the elite overall prospects in America's 2020 Class, and has been since he was a youngster. Walker chose to skip his senior season this year and sit out in preparation for next year. Regarded by most scouting services as a Top-20 national prospect in the class, since he was a middle-school prospect, Walker transferred from Moreau Catholic High School in Hayward, California, to transfer to Hillcrest Prep Academy in Phoenix as a freshman, where he played (3) seasons.

Arizona Hoop Review Scouting Report:  Kyree Walker is a man among boys physically, and is considered among the nation's elite prospects and has been for some time.  Walker loves the game and plays with considerable passion whenever he steps on the floor. He is an absolute competitor that loves the game and enjoys competing at the highest level. Walker is among the elite overall prospects in America's 2020 Class - regarded by most as a Top-20 national prospect in the class.  Walker is a big-time talent that is physically very strong and has very good athleticism.  He has a nice handle of the basketball and a strong feel for the game, which allows him to make plays off the dribble and finish strong at the rim, while also being able to set up his teammates for scoring opportunities.  He is a good penetrator and a very strong finisher at the rim.  He has a good shooting stroke with range on his shot, and is able to make plays off the dribble to make plays for himself and others.  He is capable of making players around him better, as a result.  Very good in transition and in the open floor, and is a good slasher.  A good rebounder as a result of his sheer size from the guard position, although I would like to see him concentrate on this area of his game more.  A good one-on-one defender with good lateral quickness.  Has a very bright future ahead of him. An excellent NBA prospect for the future.