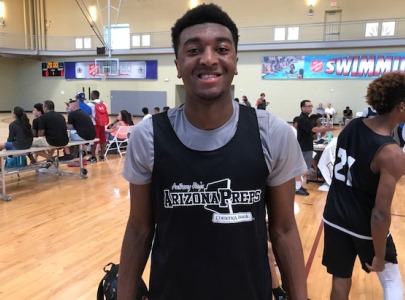 I had just commented to a member of the Sun Devils' staff last week that it was amazing that Walker had stayed committed to the Sun Devils for so long without wavering, and now that has ended as Walker has decided to look at other college programs for his future.

Walker's father had put out a tweet this Saturday afternoon, commenting on his distaste for the communication with the Arizona State staff, alarming everyone in the basketball community.  On Sunday, Walker decided to pull the trigger and re-open his college recruitment - parting ways with head coach Bob Hurley and his staff.

Walker is among the elite overall prospects in America's 2020 Class.  Regarded by everyone as a Top-20 national prospect in the class, Walker transferred from Moreau Catholic High School in Hayward, California, to transfer to Hillcrest Prep Academy in Phoenix as a freshman.  Walker is a big-time talent that has received rave reviews nationally, since he was a youngster in middle school.  Walker has been dominant in the high school ranks and has become a household name among basketball enthusiasts around the country.

Now after re-opening his college recruitment, schools will now be getting in line to recruit the gifted guard prospect.  After deciding to re-open his college recruitment Sunday evening, Hillcrest Prep staff reported that Walker has already received new scholarship offers from Cal, Memphis, UCLA, LSU, Oklahoma, Illinois and Grand Canyon.  Look for many more college programs to now recruit and offer the superstar guard prospect.

The Sun Devils also still have an offer on the tale for Walker, and look for the Sun Devils to continue to recruit the gifted guard prospect.

This high school season at Hillcrest Prep, Walker will team up with co-junior guard and recent transfer Dalen Terry to give the program one of the top backcourts in the country.

I will continue to follow the recruitment of Walker and also this story closely, and bring you any updates as they continue to develop.

Arizona Hoop Review Scouting Report:  Kyree Walker is a man among boys physically, and is considered among the nation's elite prospects and has been for some time.  Walker loves the game and plays with considerable passion whenever he steps on the floor.  Unlike many elite prospects in the country that sit out most events of this kind, Walker looks forward to the challenge and compete consistently.  Walker is among the elite overall prospects in America's 2020 Class - regarded by everyone as a Top-20 national prospect in the class.  Walker is a big-time talent that is physically very strong and has very good athleticism.  He has a nice handle of the basketball and a strong feel for the game, which allows him to make plays off the dribble and finish strong at the rim, while also being able to set up his teammates for scoring opportunities.  He is a good penetrator and a very strong finisher at the rim.  He has a good shooting stroke with range on his shot, and is able to make plays off the dribble to make plays for himself and others.  He is capable of making players around him better, as a result.  Very good in transition and in the open floor, and is a good slasher.  A good rebounder as a result of his sheer size from the guard position, although I would like to see him concentrate on this area of his game more.  A good one-on-one defender with good lateral quickness.  Has a very bright future ahead of him.