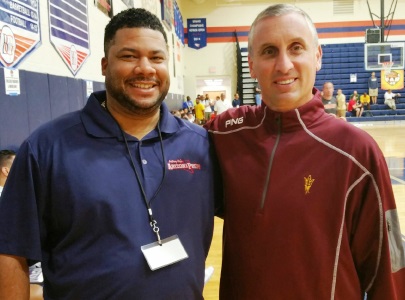 When Hillcrest Prep Academy recent transfer, 6-foot-4, 210-pound sophomore wing prospect Kyree Walker gave a huge and early commitment to the Arizona State Sun Devils recently, it was the biggest commitment reeled in by the Sun Devil program since James Harden.  In fact, it was much bigger and much earlier in the recruiting process - setting up the Sun Devils for a new era under Bob Hurley, and a new age of college recruitment of America's top prospects by the program.

Walker is among the elite overall prospects in America's 2020 Class.  Regarded by everyone as a Top-5 national prospect in the class, Walker recently announced that he would be leaving Moreau Catholic High School in Hayward, California, to transfer to Hillcrest Prep Academy in Phoenix.

Landing such a top-rated national prospect as Walker for the Arizona State program, and early in the recruiting process, establishes the Sun Devils as a rising power in the West.  The commitment of Walker completely changes the perception of the Arizona State Sun Devils in their ability to attract top-rated national  talent, and also proves that the Sun Devils are for real - now a definite option for the nation's top prospects.

With Walker giving a verbal commitment while still such a young prospect, only entering his sophomore season, it will give the Sun Devils an opportunity now to recruit other top-rated prospects to play with Walker from the 2019 and 2020 classes.  This fact could completely change the recruitment by the Sun Devils, as they look to land other gifted prospects from around the country.

This high school season at Hillcrest Prep Academy, Walker will team up with other top-rated national prospects as Josh Green, junior guard Markese Jacobs (University of Kansas commit) and 6-foot-10 rising senior post KJ Hymes to give Hillcrest Prep one of the most talented lineups in the country.