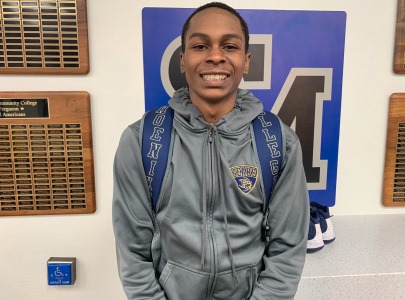 Phoenix College (1-1, 4-3) is under new leadership this season, as new head coach Duane Eason has taken over the program.  The Bears are off to a good start in the conference this season and on Wednesday evening, they visited South Mountain Junior College (0-2, 3-3), their Division-II rival in the conference.  While Pima Junior College is the definite D-II favorite this season, these two programs have consistently battled for the regular season title.

6-foot-4 sophomore guard Deron Kyle has returned back to basketball this season after sitting out for a few years.  A 2014 graduate from Deer Valley HS, Kyle has grown a great deal physically and will be one of the conference's top performers this season.  Kyle is an athletic and skilled guard prospect that is versatile and able to play multiple positions on the floor.  Kyle got off to a great start in the contest, knocking down several three-pointers early in the first half to help Phoenix College build an early 27-10 lead over South on the road.

After a nice offensive tip-dunk over a defender by 6-foot-8 freshman post Alfredo Fuentas, Phoenix would take 29-12 lead with 10:45 left to play in the first half.

Another three-pointer with just over a minute left to play in the first half by Kyle, and Phoenix would eventually take a nice 48-28 lead into halftime.

South Mountain would come out of halftime fired up to turn things around, and they would make a dent into the Phoenix lead in the second half.  But just as they would narrow the huge Phoenix lead, Phoenix would push the lead right back to a 20-point margin after consecutive baskets by 6-foot-2 sophomore guard Michael Walcott and 5-foot-10 sophomore guard Kenny Sutton, 64-45.

South Mountain would turn up their defensive intensity as a team, and after consecutive three-pointers from 6-foot-8 sophomore wing Zach Williams, South would pull to within 11-points, 64-53.

Phoenix though would not crumble, and after a nice three-pointer on an in bounds play from 6-foot-5 sophomore wing Darius Goudeau, Phoenix would jump back out to a 75-57 lead with 7:48 left to play.  With 6 minutes remaining, Kyle would again knock down another three-pointer from the corner - giving Phoenix a 78-59 lead.

Phoenix College would then cruise to a 86-69 road victory over South.  Phoenix will now prepare to face Mesa JC on Saturday, while South Mountain will look to rebound on Friday against Scottsdale JC.

Notes:  Phoenix College 6-foot-5 sophomore wing Darius Goudeau is a nice looking recruiting target for the conference this season.  Goudeau is off to an excellent start to the season, averaging 20.2 points and 8.8 rebounds per/game, while shooting 45.6% from the field this season.  A graduate of Mesa HS, Goudeau is a very nice talent with a nice overall skill level and good physical size to play the wing position.  He has a nice shooting stroke with range on his shot, and also has a good overall mid-range game.  He is deceivingly athletic and plays with good pace.  Goudeau is also a good passer and a good ball handler that has good overall versatility as a player.  He should only continue to improve as a player as the season progresses, as he continues to get into better shape physically.  A solid low to mid-major division-I prospect.