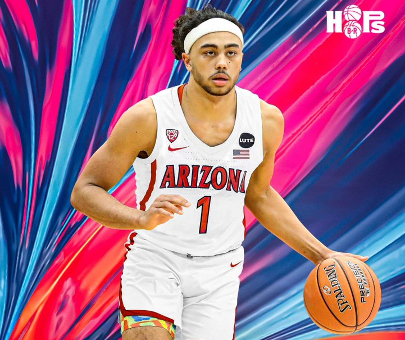 In case you missed it, earlier this month AZ Compass Prep 5-star 6-foot-2, 180-pound point guard Kylan Boswell made a big decision to reclassify from the 2023 Class, to the 2022 Class. As a result, Boswell will play for the University of Arizona this fall and skip his senior season of high school @ AZ Compass Prep.

Boswell made this exciting announcement earlier this month, which will now provide an excellent boost for the Wildcats' roster for the 2022-2023 season. Boswell was ranked as the No. 15 player in the 2023 Class, before transitioning to the 2022 Class, by 247 Sports.

A native of Ontario, Canada, which produces many high-level college prospects, Boswell shocked the nation of basketball scouts and media last summer, when he decided to leave Southern California's Centennial High School for local power AZ Compass Prep - joining an already loaded roster of Division-I prospects. Many marveled at why he would venture to Arizona, after so much recent success on the basketball court. Previously, Boswell led Centennial to the prestigious CIF Southern Section Open Division title over a loaded Sierra Canyon High School (CA) ballclub. He then led his club program, Team Why Not (CA), to the E16 Peach Jam title, before then also winning a Gold Medal with Team USA's U16 squad during last summer.

Boswell then decided to transfer from Centennial to Compass Prep for his junior season, after so much success early in his playing career in order to play a national schedule against the country’s top teams, and ultimately develop as a player and push himself amidst tougher competition.

Boswell helped to make AZ Compass one of the elite teams in America last season, as the program was actually ranked as the #1 program in America during the season. Boswell gave a big verbal commitment to the University of Arizona and new Head Coach Tommy Lloyd during his junior season.

Many basketball scouts and media understand the value brought by Boswell, who is a pure point guard prospect that knows how to run a team efficiently - making plays for himself and others at a high rate. He is a very skilled performer that is fundamentally sound and tough, able to score and assist for his teammates as needed. He is a very good shooter of the basketball with nice range on his shot, and is a very strong driver of the basketball and finisher in the lane and in the open floor. He plays at a very good pace, and is never sped up. He is a bigger guard with a compact and strong physical frame, which allows him to overpower opposing guards and get into the lane. He is also a strong rebounder from the guard position and an excellent defender with quick hands and feet, and plays passing lanes quite well.

I look forward to watching Boswell continue to develop at the University of Arizona next season, and look forward to seeing how much of an impact this young man will make for the Wildcats. Arizona fans will love him, as he should become a crowd favorite overnight. Congratulations to him and the AZ Compass Prep program, and good luck to Boswell and his family on this amazing accomplishment.