Kylan Boswell Is A Special 2023 Prospect 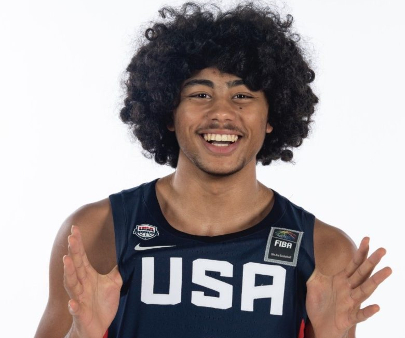 While college programs across the country are really focused on the 2022 Class currently, many high-major Division-I programs have already turned their sights towards the 2023 Class as well, as many prospects in the class have already risen to the top of the class, and have become hot commodities to land among their peers. AZ Compass Prep's terrific 6-foot-2, 185-pound junior guard Kylan Boswell is a special talent among the nation's elite 2023 prospects. After a recent transfer to the state of Arizona's prep school ranks, and landing at national power AZ Compass Prep, Boswell is a unique-level talent that is hearing from a large number of college programs, and if he doesn't already have an offer from a respective college program, he soon will.

A native of Ontario, Canada, which produces many high-level college prospects, Boswell shocked the nation of basketball scouts and media this summer, when he decided to leave Southern California's Centennial High School for local power AZ Compass Prep - joining an already loaded roster of Division-I prospects. Many marveled at why he would venture to Arizona, after so much recent success on the basketball court. Last season, Boswell led Centennial to the prestigious CIF Southern Section Open Division title over a loaded Sierra Canyon High School (CA) ballclub. He then led his club program, Team Why Not (CA), to the E16 Peach Jam title, before then also winning a Gold Medal with Team USA's U16 squad during the summer.

Boswell then decided to transfer from Centennial to Compass Prep for his junior season, after so much success early in his playing career in order to play a national schedule against the country’s top teams, and ultimately develop as a player and push himself amidst tougher competition.

“I loved it at Centennial, but I just wanted to continue to push myself,” Boswell told Sports Illustrated. “Just being here I know it was the right move, because the practices are so intense against the top players. Most of the time, the practices are gonna be harder than the games here; that’s just gonna make me take it up a notch every day.”

Currently, Boswell has a long list of offers for himself from Kansas, Texas, UCLA, Michigan, Louisville, Arizona, Oregon, Stanford, Creighton, Florida, Vanderbilt, Washington, Illinois, USC, Texas Tech, UNLV, San Diego State, George Mason and Eastern Washington, with many more schools looking to get involved and extend offers over the next year. Boswell's list of college suitors will only continue to develop and grow over this prep season.

Many basketball scouts and media understand the value brought by Boswell, who is a pure point guard prospect that knows how to run a team efficiently - making plays for himself and others at a high rate. He is a very skilled performer that is fundamentally sound and tough, able to score and assist for his teammates as needed. He is a very good shooter of the basketball with nice range on his shot, and is a very strong driver of the basketball and finisher in the lane and in the open floor. He plays at a very good pace, and is never sped up - making the game look easy. He is a bigger guard with a compact and strong physical frame, which allows him to overpower opposing guards and get into the lane at will. He is also a strong rebounder from the guard position and an excellent defender with quick hands and feet, and plays passing lanes quite well.

Boswell can play either guard position, and he will share time in the backcourt this season with Compass Prep's loaded roster of guards, which includes UCLA commit Dylan Andrews and Rice commit Mekhi Mason. Regardless of what position he plays or where he is on the floor, Boswell is a special talent and will draw rave reviews this prep season, as AZ Compass Prep looks to regain and defend their 2021 Grind Session National Championship.

I look forward to watching Boswell continue to develop, although he has already done so much in his young career. This young man is a special talent in America's 2023 Class, and I am thankful to have the opportunity to watch him play this season, right here in my own backyard against some of the nation's elite prospects. The future is extremely bright for Boswell and the AZ Compass Prep basketball program, which will look to also regain their #1 national ranking this prep season.