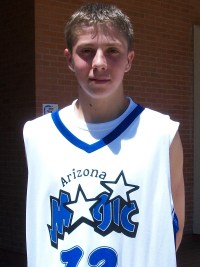 Horizon High School's 6-foot-2 junior guard Kye De Laveaga has developed as a player at his own pace - something we have talked about over the past several years of high school.

Many talk about the fact that Kye has developed as a player much differently than his younger brother, Horizon HS 6-foot-2 sophomore guard Tate De Laveaga. Both sons of a former sharp-shooting professional player, Jeff De Laveaga - Tate developed early as a competitor, while Kye has taken more time to develop physically.

While Kye has had tremendous success under the coaching of his father on the club circuit as a shooting guard, he has had to develop again as a player under the leadership of Horizon HS head coach T. Kipp Clark this season, and now as a full-time point guard.

Last summer, Kye came off his best performance of his basketball career - leading his club team, the Arizona Magic-2013's to a big semi-final finish at the Adidas Three Stripes tournament in California. In the event, Kye went off - leading his team in scoring and pumping in big numbers throughout the event, but as a shooting guard.

This season has been a challenge for Kye and his teammates, as they have struggled to gain any kind of consistency as a team. Horizon (9-13) has won 5 of their last 9 games, and now is beginning to look like the team they had envisioned they would be this season.

Kye has been the catalyst, as his play has directly resulted in his team's improved performance. In a recent 64-60 loss to Brophy Prep last week, Kye poured in 23 points and 5 assists in his team's loss, including two consecutive clutch three-pointers (5 for the game) down the stretch for his team.

In a big win over Desert Mountain HS on Friday evening, Kye again came up big for his team in their win, turning in a team-high 23 points, 8 assists and 4 rebounds in the victory. Kye would also hit (5) three-pointers in the game - including a big three-pointer at the game's buzzer to send the game into overtime.

Kye also received a nice visitor to his school's campus last week, as Princeton University came to see Kye and has expressed serious interest in the talented junior guard prospect.

Kye is coming into his own this season more than ever, as he has developed into a pure point guard prospect with the ability to shoot the basketball with a pure shooting stroke. His competitive drive has increased and his presence on the court is much greater.

Look for Kye to continue to develop nicely over the next year, and improve his college recruitment a great deal this spring and summer, as his club program gets set to travel on the Adidas club circuit.

Arizona Preps Scouting Report: Kye is a sharp-shooting combo-guard prospect that finds the open spot on the floor, and knocks down shots with consistency from the perimeter and with range. He has a left-handed shooting stroke and a quick release on his shot - making him tough to defend. He also does a nice job of giving pump fakes and putting the basketball on the floor to create space or drive the ball to the basket, where he is a crafty finisher in the painted area. Kye also has a solid handle of the basketball and does not waste dribbles, as he is a catch-and-shoot prospect or likes to score off of one dribble pull-ups. Kye is a combo-guard prospect that is capable of playing either guard spot on the floor, but is at his best from the scoring position on the wing. Possessing a high basketball IQ, Kye is also a very good passer of the basketball and looks for the open man on the floor. He is very unselfish as a player and does an excellent job of getting his teammates involved in the game. He is also a very good defender and works hard to keep his man in front of him. He slides his feet well and sits low defensively. While he is still maturing physically a great deal, Kye is nowhere near the player he will become over time. His best years are well ahead of him as a player and he should develop a great deal over the next year 5-6 years of his playing career. Kye has very good upside as a player - suggesting that with much more physical strength and maturity, his athleticism and ability to play the game will really take off.

Brayden Barrett Coming Into His Own