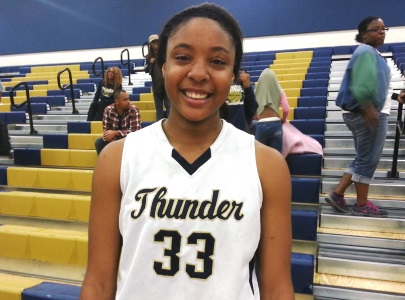 Desert Vista High School's dominant and talented 6-foot-4 junior post Kristine Anigwe has been selected as our 2014 Arizona Preps Player of the Year. Anigwe led her program t this year's Division-I State Champinship and an impressive 30-2 overall record this season. Anigwe is currently regarded among the top 20 players nationally in the 2015 class and gave a verbal commitment to Cal in the fall.
Share
Facebook Twitter LinkedIn WhatsApp Pinterest Email

Desert Vista High School's talented and rapidly developing 6-foot-4 junior post Kristine Anigwe is among the top-rated basketball talents in the country for the 2015 class.  While Anigwe was quickly seeing her college recruitment begin to soar, the post prospect has decided to end her college recruitment very early - giving a verbal pledge to a PAC-12 program.

Anigwe chose to end her college recruitment and give a big verbal commitment to Cal and head coach Lindsay Gottlieb and her women's basketball staff.

"I really liked the coaches there and the players," said Anigwe.

A promising talent that has developed a great deal over the past two years, Anigwe has superior size already as a post player and is still growing a great deal.  Standing 6-4 in heigth, she is a true post player.  She is very active and rebounds outside of her area.  She also runs the floor very well and has become a strong finisher inside the paint.  Anigwe will continue to develop over time offensively, but she works very hard on her game and has some solid post moves already.  As she develops as a low post scorer, she will see her potential improve a great deal.  Already, Anigwe has a solid jump hook and is capable of facing the basket from mid-range and shooting the basketball with a soft touch.

Anigwe has excellent activity inside the paint.  As she continues to mature physically, her aggressive style of play will suit her nicely over time.  She has already added some serious size to her once thin frame.

Anigwe has a big-time future ahead of her.  Look for this young lady to continue to develop a great deal throughout her high school career and become one of the premier talents in the country.

Anigwe plays her club basketball for the Arizona Elite.

Congratulations to Anigwe and her family from our staff here at Arizona Preps on this tremendous accomplishment.