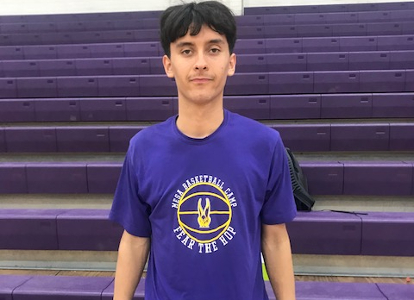 One of the top guard prospects in the state, and definitely in Arizona's 2023 Class is soaring for Mesa High School, although he is still well under the recruiting radar. Mesa 6-foot rising senior point guard prospect Kota Benson had an excellent junior season for Head Coach Scott Stansberry and his coaching staff this past high school season, and is now looking to end his high school career with a bang next season. After transferring to Mesa High School last season, Benson stepped right in and led Mesa to a successful 20-7 record on the season.

I have been very impressed with Benson as a player for some time now, as he has consistently performed at a high level over the past (5) years in exposure events that I have seen him take part in. Since his middle school years, this young man has torched his competition in numerous game, tournaments and showcase events. Watching him lead Mesa High School last season as a junior prospect, only confirmed what I already knew about this young man. Kota Benson is the real deal and a guard prospect that college programs need to take a hard look at.

Benson began his playing career at Baboquivari High School, which is located in Sells, Arizona, on the Tohono O'odham Indian Reservation - approximately one and a half hours southwest of Tucson. Benson would transfer to Mesa High School before his junior season, and in his first year at Mesa HS, Benson would earn Region Player of the Year honors in the 6A's East Valley Region. Benson averaged 13 points, 4.7 assists, 4.6 rebounds and 2.6 steals per/contest as a junior - numbers that I expect him to increase a great deal during his senior season.

Currently, as a result of his recent success, Benson is now hearing from numerous smaller college programs for his services. Benson would like to compete at the highest level that his recruitment will take him, and he is worthy of any level of recruitment he receives.

As a college prospect, Benson is a gifted guard prospect with an ability to make plays for himself and others, almost at will. He has a strong handle of the basketball and is able to get very low on his dribble action, which allows him to blow past defenders and create off the dribble for himself and his teammates. He is excellent at getting into the paint and finishing plays for himself over and around defenders, or creating shots for his teammates. He can play as a pure point guard prospect or can get buckets consistently in the offense as needed. Benson is a strong scorer of the basketball for his size and is also a deadly shooter with range on his shot. He is a herky-jerky point guard that plays with very good pace and has a nice stop-and-go ability to keep defenders off balance, which allows him to score so effectively. Benson is also a good rebounder from the point guard position that competes on the glass. He pushes the ball up the floor to the open man, and also plays fast, but can slow it down and be just as effective. A good defender also with quick hands and feet. His best asset is his high basketball IQ.

"Kota is calm, cool and collected, but is a silent assassin," said Mesa HS Head Coach Scott Stansberry. "One of the smartest and skilled players I've ever coached."

Benson is set to have a strong senior season and leading a Mesa program that lost some seniors from last season, but also returns some experienced players as well. The success of next season's Mesa team will rely heavily on the strong play of Benson, so I am sure they will be just fine.

I will continue to follow the recruitment and play of Kota Benson next season, as he is one of my favorite guard prospects to watch perform.