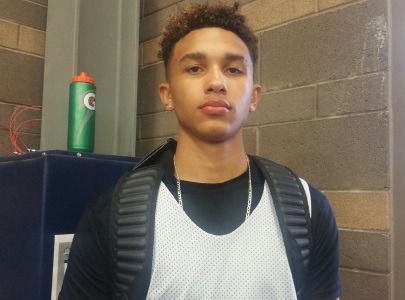 Hillcrest Prep Academy is currently super hot, after winning a national championship recently at thsi year's Grind Session, and also being the home this high school season to the nation's top overall 2018 prospect, DeAndre Ayton, a future NBA lottery pick.  The lure to play for Hillcrest Prep next high schoo lseason will be immense, and Hymes could just be the first of several more top-rated local high school prospects to transfer to the school this off-season.

Hymes performed at a very high level all spring and summer with the Las Vegas Prospects - a heavily Nike-sponsored EYBL team that year in and year out produces some of the best players in the country.  In the process, Hymes became one of the most sought after recruiting targets in the country for the 2018 class.  Hymes will play for the Prospects again this summer on the EYBL circuit.

We will continue to follow Hymes' college recruitment closely - bringing you any updates as they continue to develop.

Arizona Hoop Review Scouting Report:  Hymes is a long and skilled prospect that gravitates to the perimeter where he has a solid shooting stroke with range.  He looks to be very comfortable on the wing and will develop with maturity and hard work.  He also has a good understanding of the post position and has good low-post footwork and moves, which allow him to score inside and out.  He is a solid finisher now and uses his length to finish plays over defenders, and possesses a good overall feel for the game offensively.  Hymes is an active rebounder and shotblocker, but he should develop in both of these two areas over time - especially as he gains much more physical size and strength.  His body is very thin now and lacks physical strength, but he should add strength over time with natural maturity and hard work in the weight room.  He is a good passer and and has a nice overall feel for the game.  Hymes has tremendous upside as a prospect.  He will only continue to improve throughout his high school career - growing into an excellent college prospect.