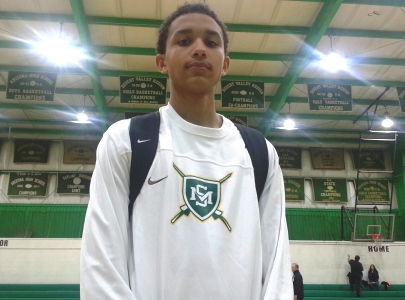 With all of the recent talk about just how good Corona's star freshman prospect Marvin Bagley has been this season as a freshman, another top-rated freshman prospect has flown relatively below the radar by most basketball enthusiasts in the state.  While every club team in the state seems to be jockeying for position for this young man's future, St. Mary's High School's 6-foot-9 freshman skilled post prospect KJ Hymes is rising onto the Arizona basketball scene at his own pace.

That pace will not be a slow one, it just won't be as fast as Bagley's.  Instead, Hymes will take longer to develop, but will also have a significant impact of his own on the basketball community.  When you consider that Hymes is the son of one of the better prospects to come out of the state of Arizona in recent years, and also already stands 6-9, it is just a matter of time for this budding young prospect.

Hymes is the son of former South Mountain High School standout Kwame Hymes Sr., who went on to play collegiately at Pepperdine University in the mid 1990's.  Hymes Sr. worked very hard to get where he eventually landed in college, and he has tried to instill the same values into his son since the beginning.  If the work ethic of the father will rub off on the son, the combination of Hymes Jr.'s size, skill and potential would make for a tremendous talent.

Hymes Jr. is already off to an excellent start this season, as he has started for the Knights all season and turned in some strong performances this season.  No performance was stronger this season than his recent 31-point effort in a 62-44 win by St. Mary's over Camelback HS - proving that this young man is a major prospect for the future.

Hymes is a long and skilled wing prospect that gravitates to the perimeter where he has a very nice shooting stroke with excellent range already.  He looks to be very comfortable on the wing and has already shown some nice skillsets that suggests he may continue to play the wing position over time.  He also has a good understanding of the post position and has good low-post footwork and moves, which allow him to score inside and out.  He is also a good finisher and uses his length to finish plays over defenders, and possesses a good overall feel for the game offensively.

Hymes is also an active rebounder and shotblocker, and should develop in both of these two areas over time - especially as he gains much more physical size and strength.  His body is very thin now, but he should add muscularity over time with natural maturity and hard work in the weight room.

Currently, Hymes is already beginning to receive contact letters from division-I college coaches, and his family is very proud that the University of Virginia has already been in contact with the talented young prospect - sending him mail.

Hymes will have a long time for college recruitment, in the future especially since he is already on the radar.  He does have a long way to go still, and just how good this young man will become will be up to him.  He is looking very good though already.