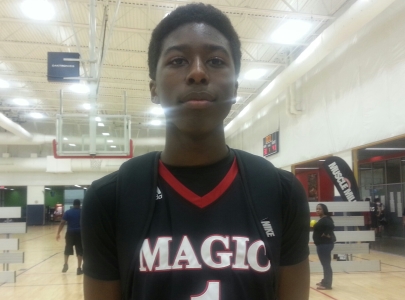 While Basha High School (6-2) and Marcos De Niza (0-3) would face each other on Tuesday evening, in a very lackluster performance which would get more exciting late in the game, there was more excitement in the stands as two college programs were in the building to catch the game.  With University of Oregon assistant coach Mike Mennenga and Rice University assistant coach Scott Pera in the building, it made for a much more exciting match-up.

Oregon was in attendance solely to watch Basha High School's gifted 6-foot-11 junior post prospect Devin Kirby, while Pera was in attendance to observe both Kirby and Basha HS 6-foot-10 junior post Klay Stall.  Both prospects would struggle on the evening in a game that lacked intensity and any true excitement.  The only excitement came late in the game with Marcos De Niza looking to get back in the contest.

After Basha led 22-14 at halftime, Marcos would make a late charge in the third period behind the play of 6-foot-1 junior guard Cameron Stark.  Stark would hit several three-point baskets and would finish with a game-high 12 points.  With the score being close, Basha would get a turn-around jump shot in the post from Klay Stall, and then another basket inside from 6-foot-5 senior forward Kendrick Gannon to close out the period - giving Basha a 37-30 advantage after (3) quarters.

Basha would go on to win the game 58-48 on the road, as Klay Stall and 6-foot-1 senior guard Chris Ahern would both finish with a team-high 10 points in the victory.  Kirby would contribute only 6 points and 8 rebounds in the win, in a game where he saw very little of the ball, but also did very little to make himself a presence in the game.  Kirby did have a two-handed monster-dunk late in the game, which left you wanting for more.

I spoke with Basha HS head coach Mike Grothaus briefly after the game, and he was excited about his team and their potential for this season.  While there is much more hard work in the works, this team has the potential to develop nicely by playoff time.

Notes:  Amazing to see former NBA player and former University of Missouri star player Doug Smith as an assistant coach for Basha HS.  Smith plays 4 seasons in the NBA after being the #6 pick in the NBA draft in 1991 by the Dallas Mavericks.  Amazing to see him donating his time to help these yougn men at Basha HS.  If Smith can rub off on Devin Kirby and Klay Stall, just a little bit, what an amazing opportunity for those two talented post prospects.