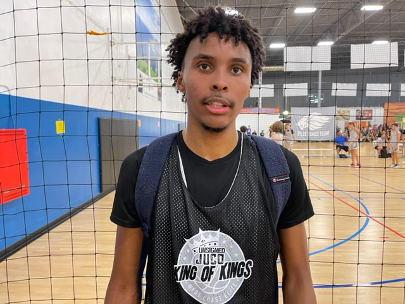 One of my favorite prospects in the Arizona Community College Athletic Conference (ACCAC) last season was 6-foot-5 freshman wing Kingdom Artis. Chandler-Gilbert Junior College had a good performance in the ACCAC last season, led by terrific Head Coach Steve Silsby and his staff. Chandler-Gilbert finished third among Division-II junior colleges in the conference and competed all season for the league title. The play of Artis was a nice contribution to this team, as he was one of the more versatile defenders in the conference, and shot a very high percentage from the field. Artis is now looking to build on his success as a freshman in the conference.

Artis has had a challenging athletic career, after suffering a knee injury in high school, which caused him to miss out on much of his college recruitment that he might have generated for himself. As a result, Artis worked very hard to return to form, and then was able to return to action this past season as a freshman. The amount of hard work it took to get back to his old self as a freshman last season has made him very appreciative of any opportunities given to him. As a freshman this past season for Chandler-Gilbert, Artis averaged 7.3 points and 6.4 rebounds per/game this season, while shooting a very impressive 56.4% from the field. Artis was very versatile on defense - able to defend several positions on the floor.

Artis is now looking to build on his success this past season - eligible to go to a four-year college now and will have (3) years of eligibility, if given the opportunity. He also could return to Chandler-Gilbert next season as a sophomore and improve on his freshman season numbers. Whatever option presents itself for Artis, he is ready to continue to prove that he can play at a high level and improve on his recent success as a player.

Artis is a nice talent and a skilled wing prospect with a nice overall skillset.  He has a good perimeter shooting stroke although he does need to add more consistency from longer ranges. He is able to make plays for himself and others off the dribble, where he is a good finisher in the lane against bigger defenders.  He is very good in the open floor, and is a good slasher.  An active rebounder with good size for the wing position.  A good passer that sees the floor and is willing to make plays for others.  A very good sleeper prospect.

Artis has a great smile and an exceptional personality and attitude, on and off the court.  He is the son of former Arizona State football and basketball player Carlos Artis, one of the state's top athletes of all-time.