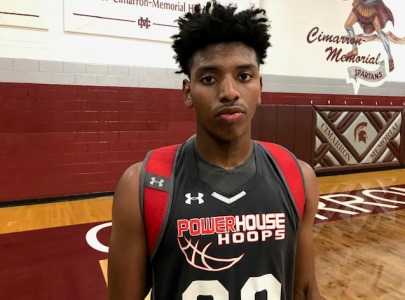 Portland State has done an amazing job in recruiting the state of Arizona since the hiring of successful Head Coach Barrett Peery and his hard-working staff, which is led by Arizona product and former McClintock High School assistant coach Jase Coburn. Their success with Apollo High School graduate, Holland "Boo Boo" Woods, immediately fueled the program. Woods has earned several All-Conference honors in his first two seasons in the program. Portland State has also reeled in numerous other Arizona prospects over the past two seasons, and now Kiimani Holt is the latest to give his commitment to the rising Big Sky program.

Holt had an excellent summer performance for himself in 2018 as a rising junior, while anchoring a talented Powerhouse 16U team that did not lose much last summer.  Holt was one of the featured prospects from the team. Holt recently transferred from Rancho Solano Prep, and now will play his senior season for PHHoenix Prep, a new first-year prep program that is loaded with top-rated local talent.

After receiving each of these offers heading into his junior season, many of the programs continued to recruit him hard throughout his junior season and into his final spring and summer, but Portland State won out in the end.

Holt is a super athletic talent with excellent bounce off the floor, but needs to add consistency to his perimeter shooting stroke to maximize his potential as a player, which will open up his overall ability to score on the floor. He has the athleticism and skillset to really be a player over time in the Big Sky Conference, and with continued hard work, he could become a steal for the program.

Congratulations to Holt and his family on this commitment, and future signing with a division-I program from our staff here at Arizona Preps.

Arizona Hoop Review Scouting Report:  Holt is among the very best athletes in Arizona's 2020 Class.  He is a unique athletic talent with strong athleticism in the open floor and while slashing to the basket in the half-court set.  He has an ability to dunk the basketball over and around defenders, and has an explosive first step and gets off the ground quickly and finishes very strong at the rim.  An excellent slasher.  A very good mid-range shooter that has range on his shot, but is at his best when attacking the basket or pulling up from mid-range.  Needs to add consistency to his shooting stroke from longer ranges. A solid ball handler.  An OK passer.  A good defender that plays passing lanes.