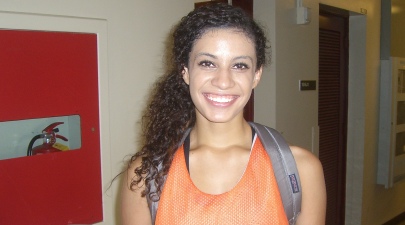 Centennial High School's 5-foot-11 rising senior forward Kiara Clark is among the elite prospects in Arizona's 2013 class, and she has soared as a college prospect - although you do not hear her name mentioned as much as many of the other elite-level talents in the state.

We recently ranked Clark as one of our top prospects in Arizona's 2013 class, and she is one player that could see a much higher ranking in our next release in the fall.

Clark is coming off an amazing junior season where she put up ridiculous numbers on the season - averaging a team-high 23.3 points, 5.5 rebounds and 3.3 steals per/game on the season, while leading her Centennial HS team to a 16-12 overall record in the state's top Division-I Class.

Clark put up a scoring high on the season of 42 points in a 72-50 win over Sandra Day O'Connor HS.  She also put up 38 points in a 65-52 win over Sunrise Mountain HS.  Clark surpassed the 30-point clip on five different occasions during the 2011-2012 season, and was very close to doing so in many other different contests.  Clark also shot 46% from the field and 81% from the free-throw line on the season.

Clark's extreme success as a player has not come without serious hard work, as she has developed as a player a great deal over the past three high school seasons.  She has been a three-year starter for Centennial HS head coach Matt Visintainer in her previous three seasons, and will begin her fourth season as a member of the varsity this high school season - an impressive honor.  A much more impressive fact is that Clark has also led the team in scoring in each of her high school seasons, and has grown from 5-foot-8 as a freshman, to now 5-foot-11 heading into her senior season.

I caught my first glimpses of Clark in our previous two annual Arizona Preps Fall Showcase events.  In both events she ranked among the top overall prospects, and progressed a great deal as a player from our 2010 event to the event held in 2011.

Clark is the daughter of former MLB star Tony Clark, so she has excellent athletic bloodlines.  At 5-11 in height, Clark is a versatile and skilled prospect that is able to play several positions on the floor, but is at her best as a small forward or wing, where she is able to handle the basketball in the open floor and score the basketball from the wing or in the post.  Clark has very good athleticism and plays with a high motor - a very productive performer.

Clark is currently rated as our #9 overall prospect in Arizona's 2013 class, and has the potential to be rated higher.  With the 2013 class being so loaded with talented prospects in the state, Clark is definitely a high-major division-I prospect worthy of serious college recruitment, which she is already receiving from many high-major programs across the country.

I will continue to follow Clark's recruitment closely this high school season, and bring you any recruiting updates as they continue to develop for the talented senior prospect.