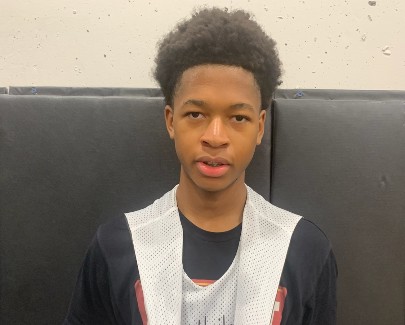 AZ Compass Prep is loaded with top-rated talent for the 2020-2021 prep season, and has grown the program a great deal over the past several years. One of the elite young prospects in the program, and the state's 2023 Class of prospects is 6-foot-7 sophomore wing Kevin Patton Jr. Patton is a superb talent, and was recently selected as a Top 30 Cream of the Crop All-Star selection, at the recent Pangos All-West Frosh/Soph Camp in St. George, Utah, and is one young prospect on the rise now in the West.

I was in attendance for the recent Pangos All-West Frosh/Soph Camp in Utah, where there were more than 220+ prospects in participation for the camp. Patton was a Top 30 selection for the event, which was a tremendous honor for an Arizona prospect. This annual camp, organized by top-rated national basketball scout Dinos Trigonis, has been instrumental in identifying the top young prospects in the West annually, and for more than 20+ years. Top-rated prospects from this camp have gone on to become serious Division-I prospects at the high-major level. Former NBA guard Jerryd Bayless attended the camp in the fall of 2004 as an unrated prospect, and left the camp as one of the top 20 prospects in America.

Compass Prep's Kevin Patton is now in an excellent position for himself to build on his recent success. As a Top 30 selection from this event, he will now receive tremendous recruiting interest, as a result, and should begin to build a tremendous reputation with high-major Division-I programs across the country. While he is still young in the recruiting process, Patton has now positioned himself among the elite young prospects in the West.

Currently, as a mere 2023 prospect, Patton does not have an offer to his credit, but his recruitment will begin to take shape over time.

Patton is a skilled, bigger wing prospect with a nice overall offensive skillset. A left-hander with excellent versatility as a young prospect, Patton is able to play as a guard or wing currently, and will only develop over time as he continues to mature physically. As he gets physically stronger, he should see his overall play and production increase a great deal. Patton is a good shooter with range on his shot, which allows him to keep defenses honest, and allow him to create plays off the dribble for himself. where he is a good finisher from mid-range and in the lane. Patton is a good mid-range performer also, able to stop and pop off the dribble, and pull up for a nice jumper over defenders. He is skilled and is a good ball handler that can share time at the off-guard position, and is also able to push the basketball up the floor from the point position.

Patton sees the floor well and is a willing passer that pushes the ball up the floor to the guard and then fills the lane on the break, or pop out to the wing in the secondary break for an open shot. He is a good rebounder also, as a result of his length and size, and should really blossom in this area over time, as he matures physically. He could brow to 6-8 or even 6-9 in height over the next few years, which would really take his game and potential as a college prospect to another level.

Patton is a solid defender now on the ball, but is currently at his best while playing passing lanes, where he is able to deflect passes and get out on the break and finish plays in transition. As a continues to develop, I would like to see him focus more on the defensive end as a one-on-one defender, and look to become stronger defensively to maximize his potential as a player.

Patton is a very good looking young prospect in Arizona's 2023 class, and, after his strong recent performance in Utah, I expect him to become one of the bmore sought after recruiting targets in the West. With continued focus on his body and tightening up his overall offensive skillset over time, this young man could become one of the elite prospects in America.