Kevin Bowman Pours In 47 To Lead Scottsdale Past Glendale 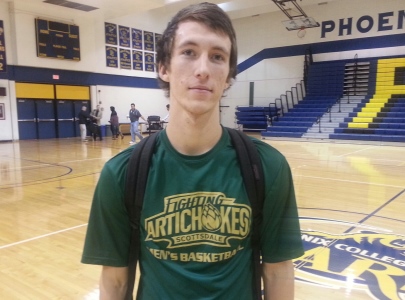 All season, I have regarded Bowman as a mid-major division-I guard with ultimate sleeper potential.  On Wednesday evening he proved it, as he caught fire in the game's second half and carried his team on his back en route to a big win.  Scottsdale would score an amazing 88 points in the second half and two overtimes to defeat the Gauchos.

Glendale would look to be on cruise control after outscoring Scottsdale by 14 points, 46-32, in the first half.  High-scoring 6-foot-5 sophomore wing Ronald March of Glendale JC would put on a show of his own early in the game and early in the second half.  March would almost score every trip down the floor for a 10-minute span in exciting fashion.  March though would collect his fourth foul early in the second half, which would halt the huge scoring outburst of the Gauchos.

With March on the bench, Kevin Bowman would go to complete work on the Glendale defense.  Bowman would terrorize the Glendale guards - knocking down one three-pointer after another, mixed in with numerous drives to the basket.  Bowman would bring his team back into the game single-handily.  March would foul of the game late in regulation with a team-high 31 points and 9 rebounds.

With 4 minutes left to play in the game, Glendale would hold on to a 86-83 lead, but with 1:13 left to play in regulation, another three-pointer by Bowman would make the score, 92-90, in Glendale's favor.   After two missed free-throws from 6-foot-1 sophomore guard Michael Barry, Scottsdale JC 6-foot-4 sophomore forward Richard Palmer would tap in a missed shot by 6-foot-2 freshman guard Desmond Medder at the buzzer to send the game into overtime.

In the overtime period, with 43.1 seconds left to play, Glendale 5-foot-10 sophomore point guard Anthony Hendrix would make 1 of 2 free-throws to tie the game at 103 all.  Then just seconds later, 6-foot-9 sophomore post Jordan Didier would make a nice assist to 6-foot-7 freshman forward Robert Blount for a layup inside, and a 1-point Glendale lead, 105-104.

Then with 2.6 seconds left to play, the weirdest play o the year would take place, as Glendale's Anthony Hendrix would get called for a technical foul off the ball and away from the play, as his teammate Alex Johnson was being fouled.  The technical would allow Kevin Bowman to knock down two free-throws to give Scottsdale a 1-point lead of their own, 106-105.

Then Alex Johnson would go to the line, but only to convert 1 of 2 free-throws to tie the game at 106 each.  The game would go into a second overtime period.

In the second overtime period, Jordan Didier would keep his Glendale team within reach, until with 30.6 seconds left to play when Bowman would knock down two more free-throws to seal the win for Scottsdale.  Scottsdale would win the game, 120-116 behind a huge 47-point outburst from Bowman - a tremendous performance.

Glendale would get another really nice game from Jordan Didier, who would finish with 21 points, 18 rebounds 6 assists.  Glendale would also get 17 points from Anthony Hendrix and 16 points from Michael Barry.