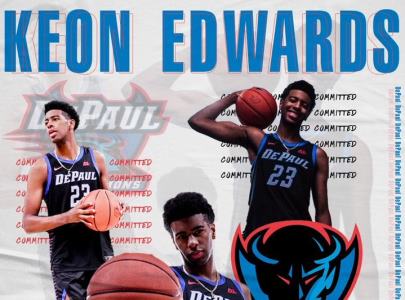 When Hillcrest Prep 6-foot-7, 180-pound junior wing prospect Keon Edwards recently gave a big, early decision to commit to DePaul University, it was a big deal as the Top 50 national prospect from America's 2021 Class decided to end his recruitment early in the recruiting process.

Before coming to Hillcrest Prep this high school season, Edwards previously attended former national power Findlay Prep (NV), but after the school recently decided to shut down their program, Edwards was left looking for a new home. He would choose Hillcrest Prep where he would team up with some of the nation's elite prospects this season. Edwards has been a consistent performer on a loaded prep team that has won several major events this high school season.

A native of Houston, Texas, Edwards had a very long list of suitors for his services before making his decision for DePaul University and Head Coach Dave Leitao and his staff. Assistant coach Marc Hsu was primarily responsible for luring Edwards away from the many other programs that were involved with him.

Edwards is a long, athletic and skilled wing prospect with excellent versatility and an ability to make shots from the perimeter with unlimited range on his shot - although he still needs to become more consistent as a shooter. He is an excellent slasher and finisher in the lane and in the open floor, making him very difficult to defend for opposing teams. He is also a slick defender that plays passing lanes. He has a bright future ahead of him over time with continued hard work on his craft.

Congratulations to Edward and his family on this big, early pledge as well as the Hillcrest Prep basketball program from Arizona Preps.