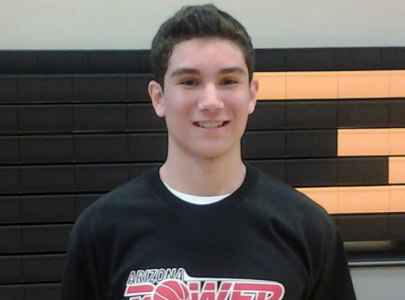 With another exciting July evaluation period now coming to another close, there are a lot of things happening in the recruiting world.  While Arizona’s 2015 class of prospects is still rounding into shape this club season, and after a nice spring and summer evaluation period, many of the top-rated prospects in the class have risen to the top of the discussion with strong performances.

One 2015 prospect that took his game to another level this club season was Chaparral High School’s 6-foot-3 junior guard Kenzo Nudo.  While playing on the club circuit for his club program, Arizona Power Black 16U, Nudo turned in several very strong performances for himself and raised his recruiting stock considerably.

As a result of Nudo’s recent development as a serious college prospect, the young man earned scholarship offers this club season from Santa Clara, Northern Colorado, San Francisco, Portland, San Jose State, Grand Canyon and Northern Arizona University.  NAU head coach Jack Murphy and his staff decided to jump on him early in the recruiting process, becoming Nudo's first scholarship offer.  Nudo is also now hearing from many other schools as a result of his progress as a college prospect.

I caught up with Arizona Power club coach John Ortega recently and he advised me that Nudo has a favorite school among his list of suitors, and that Nudo plans to make his college decision as early as next week.

This past high school season, Nudo helped lead a talented Chaparral HS team to a 22-8 overall record on the season in the state’s top Division-I Class.  Nudo would average 8 points and 2.8 rebounds on a talented Firebirds’ team – before the team would fall to Gilbert HS, in a come-from-behind win in the state playoffs at home.

Look for him to make a jump in our next player rankings and continue his progress as a player well into next high school season, where he should raise his overall numbers a great deal next season.  This young man has quickly developed into one of the top prospects in the state.

Arizona Preps will continue to follow this story and bring you an update as soon as it develops.

Arizona Hoop Review Scouting Report:  Nudo is among the best pure shooters of the basketball in the 2015 class, and while he is not tall in stature, he has a strong ability to shoot the basketball with unlimited range on his shot, while also possessing a live body that allows him to make plays off the dribble as well.  He is deadly when catching and shooting the basketball, and has also shown a good ability to put the basketball on the floor and make plays as well.  He is a clutch shooter that shoots the basketball with superior confidence and is not afraid to take the big shot for his team – a nice quality.  Nudo is a good ball handler and passer, although he has not shown an ability yet to consisently play the point position for his team – something that he will need to continue to develop over time.  At his size, an ability to play both guard positions will suit him well at the collegiate level.  But he is very capable of playing the position, as needed.  Nudo is a solid defender and has good lateral quickness.  He seems to be working hard in this area of his game and plays with good energy and a great attitude on the floor, and has has good overall work ethic.