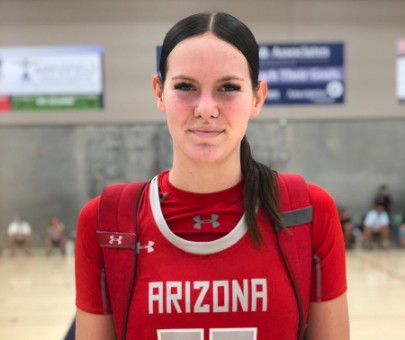 It has been a very interesting ride over the months of the growing and consistent COVID-19 pandemic, as the Arizona high school basketball season remains in limbo, set to begin in early January. As a result of the ambiguity surrounding the start and length of the high school basketball season in the state of Arizona, numerous top-rated basketball prospects in the state, boys and girls, have had to make tough decisions regarding their present and future plans for their high school careers. One thing that seems to be consistent among these top-rated performers, is the lure to play at local talent-laden prep programs, which have already began their seasons, and also amidst strong regional and national competition.

Like numerous other top-rated prospects that have changed high school destinations this fall and winter in the state, now Pinnacle High School 6-foot-7 lengthy and talented junior post Kennedy Basham is next in line to make such an important decision for herself, as the nationally acclaimed post prospect has decided to leave her high school program, and announced on Tuesday that she would now be attending the girl's basketball program at PHH Prep, where she will now team up with many of her very talented club teammates from the Arizona Select club program.

Basham is currently rated among the elite overall prospects in America's 2022 Class by ESPN - rated as the #28 overall best prospect in America.

Basham is also one of the top recruited prospects in the country, already receiving scholarship offers from such programs as UCLA, Washington, Oregon, Colorado, Kansas, Pennsylvania, Georgetown, Loyola Marymount, Utah and Vanderbilt. The list of college scholarships will absolutely continue to grow for Basham over the next year, or until she decides to give her college commitment. It is still unclear where Basham is leaning in her college recruitment.

Last season as a sophomore, Kennedy averaged very impressive overall numbers on the season - 17.6 points, 9.9 rebounds and an amazing 4.6 blocks per game, while helping lead her Pinnacle program to a 23-7 overall record on the season. She will now team up with a very loaded team of college prospects for her junior and senior season - a tremendous loss to a Pinnacle program that was looking to compete for a state title this high school season.

Ultimately, the move by Basham to an ultra-talented PHH Prep girl's program, that is one of the best programs in the country, will only help her develop as a player over the next two years, as the program features excellent talent and also coaching, which will benefit Basham a great deal over time in her continued development.

Basham is the younger sister of Sunnyslope High School's talented 6-foot-11 senior post Carson Basham (Pepperdine signee). The Basham basketball family is tremendous and quickly has helped take the state's recruitment of basketball prospects to another level. Carson is also one of the nation's top post prospects, and held a long list of scholarship offers for himself, before deciding to end his college recruitment early - giving a verbal pledge to Pepperdine University.

Arizona Hoop Review Scouting Report: Basham is a rare find nationally, not just locally, as she is a long, rangy post prospect with very good low-post footwork and an advanced overall feel for the game. She has excellent low post footwork for her young age already, and a nice jump hook that is very difficult to defend. She is patient in the low post and makes strong offensive moves in the paint, or looks for cutters and the open player on the floor for her team - making her team's offense very efficient as a result. She also has a soft touch from the perimeter, and has a nice ability to make shots from mid-range, or step out even further if needed. She will really develop this aspect of her game over the next two years of high school. Basham is an amazing defender, as she is among the elite shot-blockers in America, and blocks or alters almost every shot in or even outside of her area. She has excellent timing as a shot-blocker and rarely leaves her feet to block shots. She is an imposing force in the middle of the paint, and makes it very difficult for opposing low-post players to be successful around the basket area. After she blocks shots, she keeps the ball in play and advances the basketball to her teammates for fast-break opportunities, while being able to push the basketball herself when needed and finish strong on the other end. Basham runs the floor like a guard and runs the floor hard. Also an active rebounder that rebounds outside of her area. Basham is terrific on both ends of the floor, and simply changes the game for her team and, of course, her opponents.