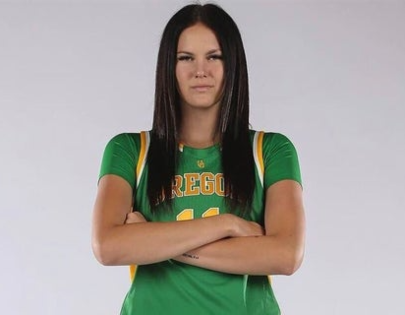 It was a big week for commitments in the state of Arizona, but none was bigger for boys or girls commitments in the state than PHH Prep's 6-foot-7 superstar senior post Kennedy Basham. One of the elite girl's prospects in America's 2022 Class of prospects, Basham ended her long awaited commitment this week - pledging to the University of Oregon women's basketball program, led by Head Coach Kelly Graves.

Basham took all of her official recruiting visits and made sure to make the right decision for herself. After going through each of her options, which also included Arizona, Arizona State, Duke, Louisville and UCLA, Basham would decide on the Ducks - joining fellow top-rated local superstar guard Jennah Isai from Valley Vista High School. Isai committed to Oregon also recently, and will give the Ducks one of the elite recruiting classes in the 2022 Class in the country among Division-I college programs.

“We’re super close off the court. I love Jennah," Basham told Duck Territory. “I feel like going in I know some of the girls there, but I’ve known Jennah longer. I feel like we’ll be able to go in and do this together, especially the both of us being freshmen, we’re going to have to figure it out together. I feel like having a relationship already will make it (10) times easier."

Basham is entering her final senior season, after an excellent season in her junior year, as she led the PHH Prep program to the first ever National Championship for girls basketball on the prestigious Grind Session. In the process, Basham left Pinnacle High School during the COVID-stricken season (2021), so she could play her junior season, at a time when AIA member schools were not playing. She would team up with a very loaded ball club at PHH Prep, many of them previous club teammates with Basham.

Basham is completely different than any girl's high school basketball prospect you will find. First of all, she is 6-foot-7 in height, which is very rare nationally. She runs the court like a guard prospect - fluid and agile. She moves like a guard and has a very long, thin frame that will fill in over time. Basham is a rare find nationally, not just locally, as she is a long, rangy post prospect with very good low-post footwork and an advanced overall feel for the game. She has excellent low post footwork for her young age already, and a nice jump hook that is very difficult to defend. She is patient in the low post and makes strong offensive moves in the paint, or looks for cutters and the open player on the floor for her team - making her team's offense very efficient as a result. She also has a soft touch from the perimeter, and has a nice ability to make shots from mid-range, or step out even further if needed. She will really develop this aspect of her game over the next two years of high school.

Basham is an amazing defender, as she is among the elite shot-blockers in America, and blocks or alters almost every shot in or even outside of her area. She has excellent timing as a shot-blocker and rarely leaves her feet to block shots. She is an imposing force in the middle of the paint, and makes it very difficult for opposing low-post players to be successful around the basket area. After she blocks shots, she keeps the ball in play and advances the basketball to her teammates for fast-break opportunities, while being able to push the basketball herself when needed and finish strong on the other end. Basham runs the floor like a guard and runs the floor hard. Also an active rebounder that rebounds outside of her area. Basham is terrific on both ends of the floor, and simply changes the game for her team and, of course, her opponents.

Basham is set to have a huge future for Oregon in the PAC-12 Conference, and is a future superstar and WNBA talent.

Basham is the younger sister of Sunnyslope High School's talented 6-foot-11 senior post Carson Basham (Pepperdine signee). Carson is also one of the nation's top post prospects, and held a long list of scholarship offers for himself, before deciding to end his college recruitment early - giving a verbal pledge to Pepperdine University.