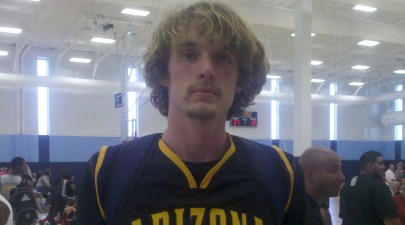 Friday night marked a much anticipated rematch between Peoria (18-1) and Kellis High School (17-1).

ArizonaPreps.com was on-hand for the action as Peoria rolled into the gym with the intentions of sweeping the season series, while Kellis tried to avenge their embarrassing 19-point road loss at Peoria, which was their only blemish on the season.

The house was packed in anticipation, with standing room only available as the two powerhouses were ready to rumble. Both teams' crowds were exchanging in a verbal war to set the mood for a dogfight in Glendale.

The game would get out to an emotional start with both teams barking at each other, mixed in with some sloppy play as both teams struggled to find any kind of rhythm.

USC-commit, 5-foot-10 senior guard Dewayne Russell, saw multiple defenders thrown at him as Kellis seemed to be determined not to allow the savvy point guard to drop 30-points on them again.

Kellis' 6-foot-9, 210-pound senior forward Kenny Martin (Arizona State commit) couldn't find the basket early, but was affecting the game on the boards and finished the first quarter with 4 blocked shots, as the game went into the second period tied.

The second quarter would belong to Peoria's 6-foot-5 senior wing Lawrence Pierce as his energy seemed to be the determining factor before the half. With 4 minutes left in the half, Pierce would receive a pass from Russell. Pierce would make a power dribble to his left, cross-over to his right in the key, then spin back left and leaving the Kellis defenders in the dust for an easy left-handed lay-up - a thing of beauty!

Kellis continued to struggle to find buckets, but relied heavily on capitalizing on points at the free-throw line. Nevertheless, Peoria would hold on to a 4-point advantage going into the half.

The Panthers from Peoria would exit the locker room on a tear as Russell began to find his groove. After knocking down a high-arching, deep 3-point basket, Russell began to make his presence felt on the defensive end. Russell's focus defensively would fluster the Kellis guards and create turnovers - leading to easy points on the other end. After sinking a few mid-range, off-the-dribble jumpers Russell found himself marching to his own drum.

Just before the end of the third period, the future Pac-12 guard got the ball on the baseline, as he gave a right jab step to the defender and putting the Kellis defender on his heels. Russell would make a quick move on the baseline, splitting two defenders for a smooth, up-and-under lay-up.

Peoria would enjoy a sizeable lead going into the final quarter.

While Peoria was trying to punch their tickets and go back home, nobody gave Kellis the memo that it was over, as they came out pressing and swarming all over the gym. The back-court of 6-foot-1 senior guard Demitrius Balark and 5-foot-7 senior guard Wayman Payne, caused a number of turnovers early to give their team a chance to claw back into the game.

Kellis 6-foot-5 senior captain Bikonzi Moise turned up his play, and his play alone began to dig into Peoria's lead, until they found themselves within two points of tying the game.

With Peoria clinging to a two-point lead and less than a minute-and-a-half to go, Martin would collect a Wayman Payne miss and put it back to tie the game. After a Russell miss with less than a minute to go, Kellis would call on their horse again, as Martin found himself deep inside the key for a go-ahead bucket.

Peoria would get another chance to tie the game, but Russell missed off the back of the iron and they were forced to foul with 10 seconds left on the clock. Martin would go to the line and sink both free throws to give his team a two-possession lead, and wrap-up the game with a 43-39 win.

Leading Kellis in their big victory would be the play of 6-foot-2 junior guard Desmond Ross with a team-high 17 points.

In their victory, Kellis created a tie with Peoria for the best record in their respective league, as they split the season series. Though they will not see each other again in the regular season, you get the feeling that these two teams might not have seen the last of each other.

Kellis will square off against an 8-14 Shadow Ridge (Surprise, AZ) team at home, while Peoria travels to the 12-11 Thunderbird Chiefs (Phoenix, AZ).