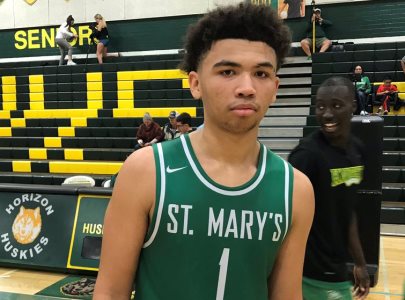 As we now take a much harder and closer look into Arizona's talented 2021 Class of prospects, there are numerous performers that would have made a big splash this spring and summer, pre-COVID-19 pandemic. Another one of the prospects that would have definitely made a lot of noise, and is one of the elite sleeper prospects in the class is St. Mary's High School's talented 6-foot-4, 195-pound junior guard Keiren Brown. Coming off an All-Arizona selection by the Arizona Republic, and leading the Knights to an impressive season last year, Brown is another prospect to take a very hard look at.

St. Mary's High School (24-4) had an amazing season in 2019-2020, behind the strong leadership of Head Coach Damin Lopez, who has rebuilt the winning tradition of one of Arizona's most historic programs. The Knights were once considering options for the school after enrollment had dipped considerably over the years, and the basketball program was suffering mightily. After Lopez took over the helm at the school, he immediately brought in top-rated basketball talent, grew the student and alumni fan base and helped tremendously to increase the school's operating budget. The 2019-2020 season was a culmination of Lopez's hard work and dedication to the Knight's program, and a brief look into the future success of the program.

Leading the Knights this past season and a big reason for the imminent success of the Knight's success next season is Keiren Brown. The son of former Arizona high school and junior college standout Keitrick Brown, who also was a gifted guard for Central Arizona College in 1996 and '97, and the nephew of former Pepperdine star and former Phoenix Suns' guard Gerald Brown, Keiren Brown comes from the best bloodlines in Arizona basketball history.

Last season, Brown averaged excellent numbers as he poured in 15 points, 8 rebounds and 8 assists per/game, which included a big 31-point performance in the 4A State Semi-Finals (loss to Peoria HS 85-59). For his performance, Brown was selected as an All-Arizona selection, and was one of only (2) juniors selected for the honor (joining Millennium's DaRon Holmes).

Even with such an impressive junior season and a college-ready body and game, Brown is the state's most underrated prospect, as he has yet to receive a division-I offer for himself. This spring and summer would have been big for Brown in his recruitment, as many college programs were looking to watch him perform. With the spring evaluation period cancelled, and now the summer still in question, Brown will be one prospect that coaches will have to research and look to gain a better feel for with less ability to evaluate.

"He is among the top (5) passers of the basketball that I have ever seen" said Head Coach Damin Lopez, one of the top offensive players to ever grace the Arizona hardwood. "He sees lanes - a special passer."

Brown is a bigger guard prospect with a college-ready body and an excellent feel for the game, as a result of being around and intertwined in the game of basketball all of his life. Brown loves to have the basketball in his hands and enjoys making plays for others - getting his teammates off before he looks to get going himself. Brown is a very good shooter of the basketball with excellent range on his shot and textbook form. His ability to make shots from the perimeter sets up his strong dribble drives to the basket, and allows him to operate in the lane. He is a difficult match-up for most opposing guards, as a result of his size and ability to push the ball and attack and finish in the lane, or in the open floor.

Regardless of spring or summer evaluations, Brown is a sure-fire division-I prospect that should be able to play and contribute immediately at the next level. The level of division-I program he eventually lands at will be interesting to see. Most coaches will want to see him play against top-rated West Coast competition to get a better feel for him as a player. Either way, this young man had an excellent showing last spring and summer, and I expect him to have a very big senior season next year.

This young man is a steal and an excellent sleeper prospect in Arizona's 2021 Class, a nice find for a mid-major program looking for a quality bigger guard prospect.

I will continue to watch Brown closely as play begins to resume sooner than later, and look for him to begin to receive serious division-I interest over the next several months.

Arizona Hoop Review Scouting Report: Brown is a big, strong guard prospect with excellent size and physical strength, which allows him to bully smaller guards and make plays for himself and his teammates, as he is able to get into the lane and finish strong around the basket. Brown also has a strong jumper with range and a good overall feel for the game. He is a good overall defender and a very good rebounder from the guard position. Coming off an excellent junior season where he helped lead St. Mary's to an impressive 24-4 overall record on the season - the Knight's best basketball season in many years. For his accomplishments, Brown was selected as a member of the Arizona Republic All-State Team, a tremendous honor him. Another prospect that should see serious college recruitment as a result.