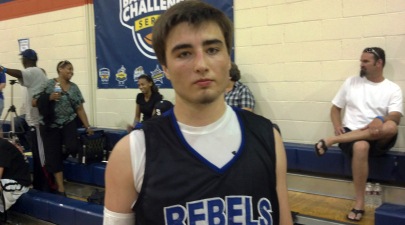 Shadow Mountain High School's 6-foot-2, 175-pound senior point guard prospect Keegan Hansen emerged on the recruiting scene during the spring evaluation period.  Rather than slow down or continue the same pace throughout the summer months, Hansen poured it on and raised his recruiting stock this summer.

While playing for the Arizona Rebels club program throughout the summer, Hansen took his game to another level and led his 17U team to numerous wins and several big finishes - including a consolation championship in this year's Pangos Sweet Sixteen tourney in LA.

Hansen came up big in each tournament this summer, scoring at a high rate and shooting the basketball with precision from three-point distance.  Hansen's best performance this summer included one game in which he finished 8-for-10 from the three-point line.

One of the top prospects in Arizona's 2013 class, Hansen first caught my attention this spring on the club circuit in the Double Pump Spring Classic.  While a lesser known name among basketball enthusiasts in the state, Hansen has proven himself, while soaring under the recruiting radar, as one of the top guard prospects in the class.

Currently, Hansen has seen his stock begin to soar with college coaches, as several schools in the IVY League have been in contact with him.  Such programs as Yale, Columbia, Dartmouth and Cornell have each been in contact with Hansen already.  Hansen is also hearing from numerous smaller college programs as well now as a result of his play this summer.

Hansen was also the most consistent performer last season as a junior for Shadow Mountain High School and head coach Cain Jagodzinski.  While the team struggled last season - finishing with a 9-15 overall record on the season, Hansen was a bright spot and will look to have a big senior season for the Matadors.  Shadow Mountain will return a very experienced line-up next season and will also add 6-foot-8 rising senior transfer Tyler Lehew (via Thunderbird HS) to their lineup, which will make the Matadors very tough to beat.

Look for Hansen to continue to develop as a player this fall and turn in a strong senior season of high school basketball during the 2012-2013 season.

Arizona Hoop Review Scouting Report:  A native of Nebraska, Hansen has a nice ability to shoot the basketball and with excellent range - his best asset.  He is capable of shooting the basketball from the standstill position or off the dribble, and is capable of creating his own shot.  He has very good toughness as a player and a serious competitive spirit that sets him apart from much of the competition.  Hansen is capable of playing both guard spots on the floor, and, at 6-2 in height, he is a bigger point guard with a nice frame.  He is a very good handler and sees the floor very well - looking for the open teammate.  He pushes the basketball up the floor to the open man and is capable of creating his own shot off the dribble, a nice asset.  Hansen is a solid defender and keeps his man in front of him, possessing solid lateral quickness.  He will need to continue to improve his lateral quickness to stay with quicker more athletic guards at the next level, but his competitive drive gives him an edge on the defensive end.  A solid combo-guard prospect that is fundamentally sound and is a winner.