Katie Werner Puts Up 25 Points To Leads Xavier In Win 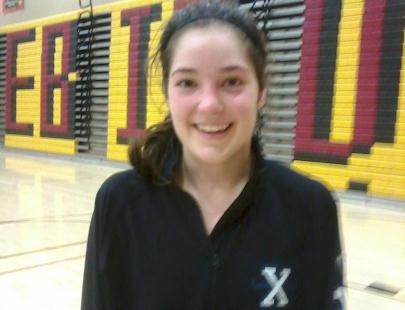 This girl's matchup was a good test for Chaparral High School (4-8) who had hoped to stay hot, following their Friday night win over Mountain Ridge HS.  Xavier College Prep (9-3) came into this game with a favorable size matchup - hoping that would make a difference.

The game started out slow with neither team taking control.  With both teams coming out cold, Xavier called a timeout at the three minute mark, leading 6-2.  A slow first quarter ended in a Xavier 10-6 lead.

The second quarter started, and the pace remained slow, until Chaparral built a quick 4-0 run to cut the lead to two, 12-10, and forcing an Xavier timeout midway through the quarter.  Xavier continued to struggle on offense, giving Chaparral the opportunity to make a run.  Finally, Chaparral was able to take advantage as 5-foot-3 senior guard Sabrina Benros stole a pass in the Xavier backcourt and made a beautiful dish to 5-foot-3 senior Alex Gilligan, who finished the layup to give Chaparral a 13-12 lead.

Out of nowhere, Katie Werner would take control and go on a 7-0 run by herself - hitting three outside shots, with one being a three-pointer.  She also showed her dominance inside - blocking shots and controlling the paint.

Xavier went into half with a 21-15 lead.  Werner gave the Gators 15 points and 3 rebounds in the first half, while 5-foot-10 junior forward McKenna Renfro added 4 points and 5 boards.

For Chaparral, talented 5-foot-8 freshman Addie Buzas led the team in scoring of the bench with 5 points.  The first half struggles for Chaparral came with controlling the ball.  They turned the ball over more than they could afford.  Maybe they would change it in the second half.

The second half was a similar story - a slow-paced game with Xavier controlling the paint.  At the end of three, the score was 27-19 Xavier.

As the fourth quarter started, it felt as if Chaparral was ready to make a run when a foul inside on the Firebirds upset head coach Brian Porth, and he was called for a technical at the 6-minute mark.  This changed the momentum, as a 29-21 lead ballooned into a double-digit lead.

Xavier was able to hold on and come up with the win by a final score of 43-26.  Xavier was led by Katie Werner who had a dominant game inside and out.  She finished with a game-high 25 points, 6 rebounds and 3 blocks.  McKenna Renfro contributed 9 points and 10 rebounds in the win.

Xavier’s height and bulk inside was too much for Chaparral to handle.  They did a nice job and put up a good fight, but couldn’t handle the Gators in the paint.